Angelababy Dresses Up as Disney Princess Elsa for 30th Birthday 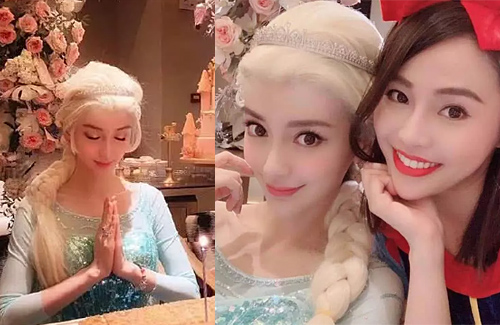 The actress glams up for her cosplay-themed party, but Huang Xiaoming is conspicuously missing.

On March 3, photos surfaced online of Angelababy (楊穎) celebrating her 30th birthday with friends at a cosplay-themed party. Dressed as Elsa from the Disney film “Frozen”, she was spotted in a glittery blue dress complete with a blonde braided long wig and a princess-style tiara.

Sitting in front of a large strawberry layered mille-feuille cake, Angelababy closed her eyes and clasped her palms while making birthday wishes, surrounded by pastel pink floral embellishments which created a romantic setting. Her cosplay attempt earned positive feedback from netizens who praised her on her resemblance to the Disney princess.

Angelababy was also seen posing happily with a little girl dressed in a princess outfit, who kissed the actress sweetly on her cheek.

Although Angelababy seemed to be having a great time with friends at the birthday event, her husband Huang Xiaoming (黃曉明) was nowhere to be seen. The power couple, who tied the knot at a lavish wedding in 2015 after six years of dating, were recently hit by divorce rumors, as the usually loving duo were hardly seen together in the recent months.

Still, Huang Xiaoming wished his wife “Happy birthday, pretty mom” on his personal Weibo at 12 a.m., showing himself and their son Little Sponge drawing Angelababy in her princess outfit, in what seemed like a deliberate attempt to dispel the negative news. Last year, he had flown specially to Paris, where Angelababy was attending the Paris Fashion Week, to spend the special occasion with her.

Unaffected by reports of her marriage, Angelababy kept up with work commitments in good spirits, and was seen attending a soccer match. 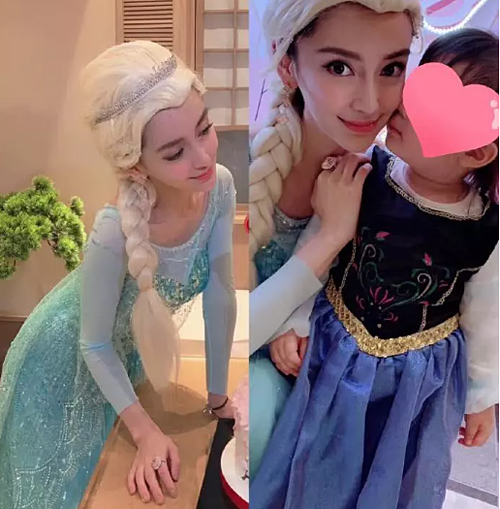