Ariel Lin on Hu Ge’s Decision to Go Back to School: “He Felt Cornered” 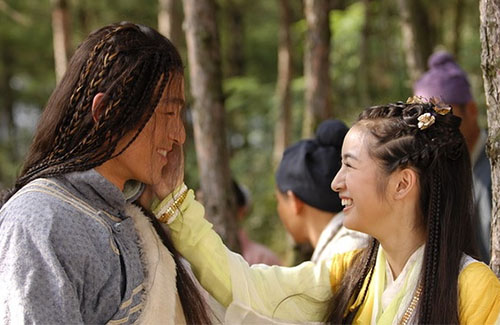 At the 2017 China Quality TV Drama Awards held in late February–Hu Ge’s (胡歌) last television appearance before making his big move to the United States to study acting—Ariel Lin (林依晨) and a few other friends in the industry surprised Hu Ge on stage when he was making his acceptance speech for the Outstanding Quality Star award.

“For a performer, and actually for an ordinary person as well, they would all experience times when people would look up to them, or look down on them,” said Ariel. “But I think that only he himself knows how to keep a level head about himself. He knows what kind of person he should be, and what he can become. Because of this, I think he will gain a lot from this journey.”

Ariel and Hu Ge remained close friends after collaborating in 2005’s The Little Fairy <天外飞仙> and 2008’s The Legend of the Condor Heroes <射雕英雄传>. Hu Ge has thanked Ariel on multiple occasions in his acceptance speeches, grateful of Ariel for passing down her wisdom to him. When Ariel won Best Actress at Taiwan’s Golden Bell Awards in 2008, she had thanked Hu Ge for his support, and said Hu Ge’s advice for her had resonated with her to this day. “He told me that an actor’s mission is to bring viewers into a deeper side of humanity,” she said.

Earlier this week, Ariel appeared on the Chinese talk show The Jinxing Show <金星秀> and talked about Hu Ge. She was asked to elaborate on her words to Hu Ge at the China Quality TV Drama Awards a few months ago. Although Nirvana in Fire <琅琊榜> pushed him to the peak of his career, Hu Ge was at a confusing place in his life.

“I asked him if he was in a lot of pressure because of his popularity, and he confessed to me that he actually felt cornered to a wall,” said Ariel. “His space became a lot more compressed, and I do feel that this journey is something that he really needs.”

4 comments to Ariel Lin on Hu Ge’s Decision to Go Back to School: “He Felt Cornered”