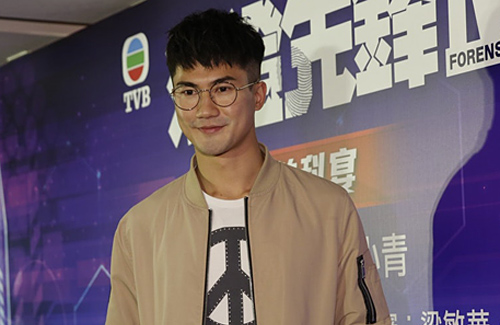 Last week, Arnold Kwok (郭子豪) was arrested for driving under the influence and was released on bail. Today, during the banquet for Forensic Heroes 4 <法證先鋒IV>, the 27-year-old TVB actor addressed the situation and thanked everyone for their understanding.

After the incident, Arnold realized his errors and took the lesson to heart. He shared, “I have been thinking of my mistake and will change in a positive manner. I am fortunate to have this opportunity to express my apologies. I want to thank TVB for their support throughout the entire situation.”

When the press first reached out to him about his DUI arrest, Arnold had initially denied it before confessing the truth. He learned that he cannot answer randomly regarding such serious matters. He said, “To be honest, there were a lot of versions [of the news] that day, but let’s not go into that topic. Firstly, I did not want my family to be worried. Secondly, it was the first time for me, so I was very nervous and concerned. So I want to apologize to everyone for lying.”

Aside from his family and TVB, Arnold is also grateful for his cast members during his time of need including Shaun Tam (譚俊彥). He said, “I really want to thank Shaun because within the drama, I mostly follow him. I see him more than I see my parents. He has really been a great mentor.”