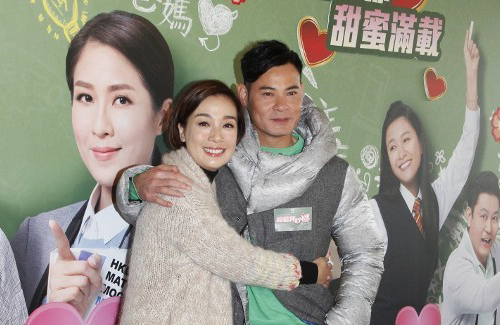 Hoping to maintain the drama’s popularity, main leads Ben and Elena recently attended a promotional event. Ben shared that he watches every episode as it airs. “The most important thing is that the audience likes us, thinks we are like a family, and allows us to be a part of their family!”

Portraying a father experiencing the temptations of midlife crisis, Ben had to seek advice from his family members for tips on how to portray his role as a parent. “The biggest problem is that neither Elena nor I have children. I had to ask my family for tips.”

Elena, on the other hand, reflected upon her role as caretaker for her pet dogs in order to prepare for the role. “I think about how I teach my dogs, and then reflect that onto children. Because we are ultimately not parents yet, we were worried that we would not be convincing [in our roles].”

Ben took the opportunity to tease Elena and rushed her to get married and start a family of her own soon. The 45-year-old actress retorted, “Even if I marry now, I will not have enough time to give birth! The doctor said I will hit menopause in the next couple of years!”

On whether she hopes the drama will reach 30 points, Elena said, “That’s up to fate! The most important thing is that it’ generating discussion. A friend told me that a child who really wanted to watch the drama did all her homework and studying ahead of time. Right now, there are very few dramas that a whole family will watch together. The family has more discussion topics, so it’s quite surprising!”