Known for her easy going personality, Mandy Wong (黃智雯) has been protective of her nine-year relationship with jewelry executive, Anthony Jim (詹文天). Living together in Anthony’s 2000-square-foot home in the Mid-Levels East, it is said Mandy is already secretly married.

A recent slip in a live stream with friends Nancy Wu (胡定欣), Joel Chan (陳山聰), and Benjamin Yuen (袁偉豪) indicate that the rumors may hold some weight.  During the chat, Mandy’s WiFi connection was choppy, and at one point she disappeared from the chat completely. Ben joked that her WiFi probably got cut because she was borrowing it, “or her husband came out and told her to hang up!” He quickly realized his mistake and instantly followed up with, “She’s not married yet…haha!” Nancy also tried to save the situation and added, “Stop making things up!”

Luckily, Mandy did not mind Benjamin’s mistake and laughed it off during an interview, “If it were true, then everyone would know! Benjamin spoke too fast and made an honest mistake–at least it’s entertaining everyone right now!”

However, Mandy shared that marriage is her end goal, and did not rule out the possibility of a flash wedding. She praised her boyfriend for being trustworthy, as he is not someone to make empty promises. “Both of us would enjoy a two-person wedding. If we have to worry about a big wedding or accidentally forgetting to invite someone, then it would become like work.” 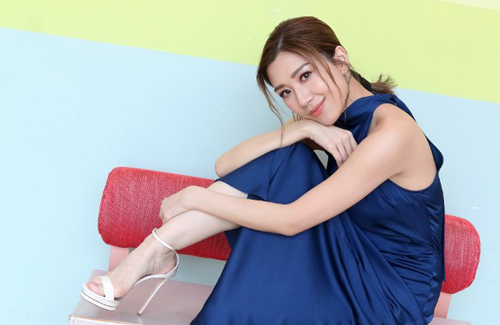 Fans need not worry that her career will be affected by marriage, as Many plans to continue acting until old age. Completely immersing herself in work, Mandy would sometimes get lost in thoughts about her jobs when speaking with her boyfriend.

Compared to other lead actresses, Mandy rarely has any juicy news or rumors to keep her in the public’s eyes despite winning TVB Most Improved Female Artiste and My Favorite Female Character awards. She acknowledges this, but feels that it is important to have work-life balance. “I may not talk about my private matters publicly, so maybe the media feels that I am a bit mysterious. However if you ask me then, I will talk about it. My creativity is lacking, so I won’t be able to think of any interesting answers for you.”