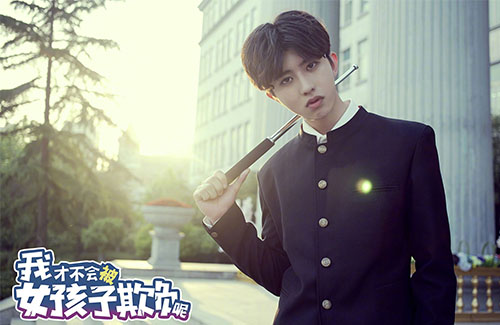 The era that used to be dominated by the former and current EXO members is slowly becoming a past. The Chinese entertainment industry now has a new number one idol on the rise—Cai Xukun (蔡徐坤).

The 19-year-old met audiences for the first time through the boy group survival show Idol Producer <偶像练习生>, which also features EXO member Zhang Yixing (张艺兴) as the show’s producer and coach. Xukun, who won first place against 100 contestants, is now a member of the boy band Nine Percent—the nine-member group made its official debut on April 6, during the show’s final episode

Xukun’s popularity is astounding. A simple Weibo update by the young star would make it to trending, with nearly a million comments. In a recent episode of Happy Camp <快乐大本营>, in which Nine Percent were guests, ratings for the episode immediately bounced to number one of the nation. Online viewership continued to rise on the second day since its release, and Xukun once again became the top trending celebrity of the week. This prompted the producers of Happy Camp to dedicate an entire episode featuring un-aired footage of the boys’ appearance.

A well-rounded performer, Xukun’s first solo production after appearing on Idol Producer was the mini drama I Won’t Get Bullied By Girls <我才不会被女孩子欺负呢>, which aired in April. Next year, Xukun will leave the school grounds to star alongside Zanilia Zhao (赵丽颖) in the film adaptation of Fighter of the Destiny <择天记>.