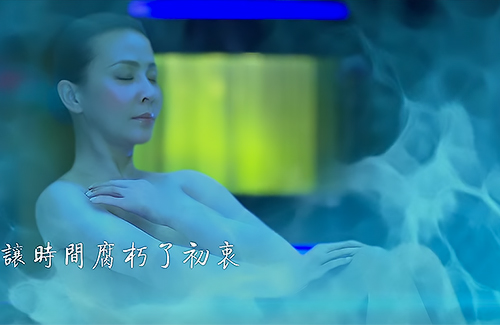 Although Carina Lau (劉嘉玲) will only be making a special guest appearance in the upcoming Hong Kong-Chinese action comedy From Vegas to Macau III <賭城風雲III>, her character “Molly” will be central to the plot.

Yesterday, the film released a music video for one of its original tracks “Frozen” <停格>, performed by Jacky Cheung. The two-minute video focuses on the love triangle between Ken (Chow Yun-fat), Tin-hang (Jacky Cheung), and Molly (Carina Lau), which is the reason behind Ken and Tin-hang’s antagonistic relationship throughout the film.

“I never get a good ending with Fat Gor,” Carina said at an earlier press conference for the film. “In the previous film, Fat Gor and I were against each other. This one will be the same. Jacky Cheung is in love with me in this film, but I do not love him in return. Honestly, if I get to choose, I rather be Jacky Cheung’s lover.”

“I’ve hurt Carina’s heart too much,” said Chow Yun-fat with a laugh. “I want to love her well this time.”

From Vegas to Macau III opens in Hong Kong theaters on February 6 and mainland Chinese theaters on February 8. It will be competing against The Monkey King 2 <西遊記之孫悟空三打白骨精>, Crouching Tiger, Hidden Dragon: Sword of Destiny <臥虎藏龍：青冥寶劍>, and The Mermaid <美人魚> for China’s Lunar New Year box office champion.

35 comments to Carina Lau, Chow Yun-fat, and Jacky Cheung’s Love Triangle in “From Vegas to Macau 3”