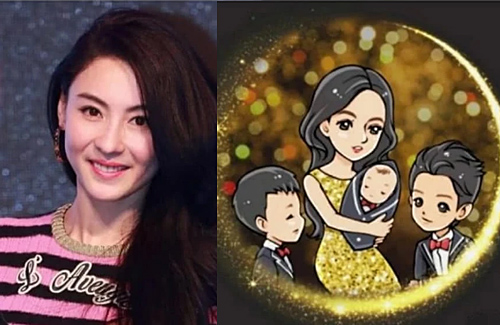 Since giving birth to her third child, Cecilia Cheung (張栢芝) was faced with many speculations surrounding the identity of her son’s father. Until now, the actress still remains firm on not revealing his identity, and even omitted his name on baby Marcus‘ birth certificate. Netizens dug up Cecilia’s past social media post, further fueling gossip that the 38-year-old single mom already broke up with the baby’s father even before Marcus was born in November.

Cecilia made a post in September, and it stated, “When needing you, you’re not beside me. When giving up on you…who are you!” This post led many to believe that the reason why they broke up was because Cecilia didn’t feel cherished.

Netizens sympathized with Cecilia that she was left to care for Marcus alone, while the father is nowhere to be seen. They left comments such as, “Cecilia, don’t you know that heart-to-heart relationships don’t exist anymore in this world? People nowadays have changed,” and “Living for so long, and you still don’t understand that nothing is fair in this world? You left this person because…he’s just not worth it.”

Since Marcus’ birth, the father has not revealed himself or visited the actress to see how the baby is doing. It is likely that he also hasn’t financially contributed to taking care of Marcus, as Cecilia rushed back to work shortly after giving birth. Many felt regretful at the 38-year-old’s situation, as it’s already not easy being a single mother with two children from her divorce with Nicholas Tse (謝霆鋒) and now she also has to care for a third baby by herself.