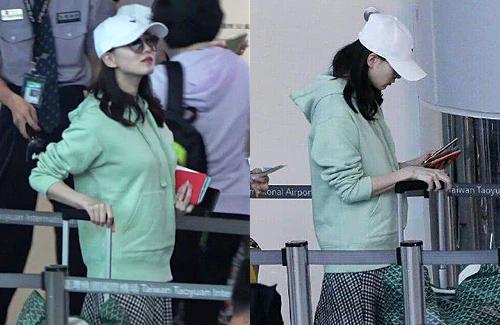 Since giving birth to her son in April, Cecilia Liu (刘诗诗) did not make any public appearances and only shared a couple of her son’s photos on social media. After five months of rest, Cecilia seems to be ready to make a comeback soon as she was spotted by herself at Tangyuan Airport recently.

Dressed in a mint-colored hoodie and checkered skirt, Cecilia was alone while holding onto her luggage. Though her face is still slim, her body seems to have gained some weight from having a baby.

Earlier, it was rumored that Cecilia will be partnering up with actor Song Weilong (宋威龙) to film a new modern drama. The plot revolves around three women who have different careers and lifestyles. After struggling through challenging life events, they are forced to adapt and become better versions of themselves. One of the main characters Beibei is a hardworking and ambitious 29-year-old sales veteran.

It is expected that Cecilia will take the role of Beibei, but some netizens wonder if she is suitable since she hasn’t worked for about a year already and her weight gain is not ideal for portraying a professional white-collar worker. Despite these thoughts, many are still excited to see Cecilia again and are patiently waiting for official announcements on her comeback.