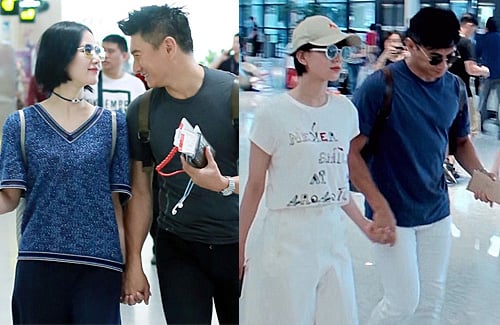 January 20 will mark the third-year anniversary for Cecilia Liu (劉詩詩) and Nicky Wu‘s (吳奇隆) marriage. The low-profile couple stunned fans three years ago when they announced that they had registered their marriage. Although often separated long-distance due to their filming demands, Cecilia and Nicky make attempts to get together even for short reunions to make sure their marriage stays fresh.

Whether at the airport or shopping at a mall, Cecilia and Nicky are often spotted holding hands when they go out together in public. Earlier, Nicky was sighted dressed in full costume from his drama while seeing Cecilia off at the airport. Without time to even change his clothes after filming, Nicky made sure to spend every minute with Cecilia before she left for her flight.

Due to Nicky being 17 years older than Cecilia, he always made sure to take good care of her and make her feel cherished. Recently, a fan shared photos of Cecilia and Nicky shopping together at a mall in Shenzhen. After buying chestnuts from a vending machine, Nicky patiently peeled the chestnuts and fed his wife. Since chestnuts are very hard to peel, Nicky’s gesture was found to be very thoughtful.  Female fans were quick to repost the photos and hope that their significant others show the same level of attentiveness.