Good news is coming for Nicky Wu (吳奇隆) and Cecilia Liu (劉詩詩), and fans are suspecting that it may be Cecilia’s comeback.

After tying the knot in 2015, the Scarlet Heart <步步驚心> couple welcomed their first child, a son, in April 2019. Nicknamed “Bubu”—an homage to “Bu Bu Jing Xin”—their son has been the heart of the home. While Nicky has been making occasional public appearances since their son’s birth, Cecilia has stayed relatively quiet, but shared a few pictures of her son on social media over the last four months. 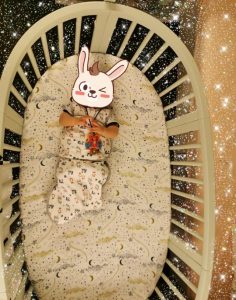 No hints of a comeback for Cecilia were given in the last four months, until today, when Nicky was interviewed by his close friend Leung Chi-kwong (梁志光) of Hong Kong’s CRHK 903 radio.

On September 4th, Leung Chi-kwong uploaded a selfie he took with Nicky on social media, a move indicating a successful radio interview. In the hashtags, Leung tagged “October” and hinted that good news will be coming that month for Nicky and his family.

Leung also said, “The minion in the backpack is him!” Nicky has recently spotted carrying a backpack with a minion attached to it. Fans deduced that the minion represented Cecilia.

What will be the good news? 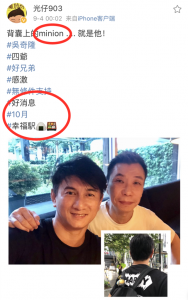