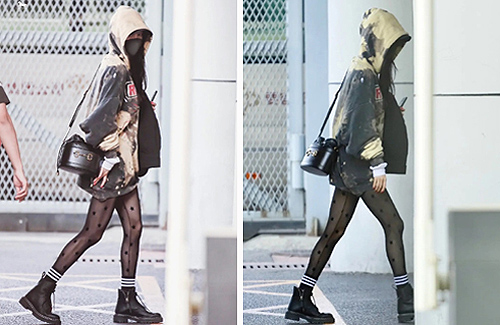 Becoming a model at the age of 15, actress Yang Mi (楊冪) is well aware of the key to best dressing. She is highly acknowledged for her fashion sense, and is considered a trendsetter and a fashion icon to young girls. Her outfits always come up as one of the hotly searched and discussed topics online in China.

The 33-year-old actress made an appearance at the airport recently, and as usual, her appearance caused much buzz online. A popular fashion account on Weibo posted her photos and praised that her pairing of a jacket, black laced stockings and red colored nails were a great choice. It was sexy and mysterious at the same time. Many netizens also supported the actress and praised that she dresses well and looks good in anything because of her slim figure.

However, against this view, some netizens were unimpressed with the star patterns on her stockings, and found it to drag down the whole outfit. They commented, “She is quite beautiful, but the stockings are just indescribable”; “So old-fashioned and not pretty”; “Honestly, I can’t make sense of it” and “The black stockings look weird.”

Despite the divided comments, it is generally acknowledged that her beautiful body figure plays the biggest role in making her fashion statements. With a sweet and beautiful face, D-cup bust size and her famous slim legs, her body figure is certainly one to cause great envy. Yang Mi had once revealed that her secret to maintaining a good physique is having disciplined eating habits. She would consume food that are low in oil, sugar and salt and in less quantities, but would have them frequently and at regular times. She also only eats until she is 80 percent full and has healthy snacks such as fruits and yogurt drinks.