Christine Kuo Doesn’t See William Luk In Her Future Yet 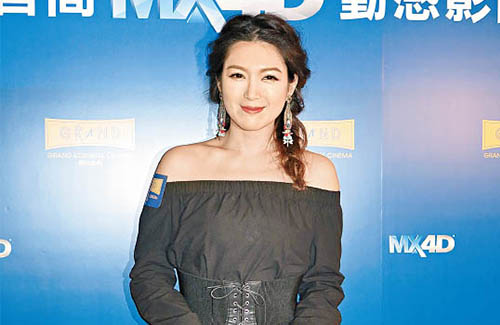 Hong Kong professional racer William Luk (陸漢洋) admitted in an interview that he is trying to win the affections of Christine Kuo (苟芸慧), who is hesitant in making their status official. At a 4D cinema event yesterday, the former TVB actress responded to her dating rumors with William, confessing that she still can’t quite see the motor racer in her future yet.

Asking if Christine could feel the effort that William has in pursuing her, Christine joked, “It does take a lot of effort for me to chase after him in the field.” (But has he successfully chased after you in real life?) “Don’t be like this!”

Pointing out that her close friend, Linda Chung (鍾嘉欣), has officially “approved” William to date Christine, the Tiger Cubs <飛虎> actress said, “Linda is our common friend, and a sister I trust very much.” (Thought about having a flash marriage like Linda?) “I don’t have a lot of thoughts about [marriage] yet. At the moment, I’m more concerned about my career direction. I still can’t picture him in my future. We are friends, and if the timing is right, then it happens.” (How many points are you giving William?) “Maybe about 90.”

Christine said that if she should get married, she would return to Canada, as most of her relatives are there.

Mentioning that her former rumored flame, Aaron Kwok (郭富城), has registered for marriage with Moka Fang (方媛), Christine said she has already expressed her congratulations to Aaron via text message. “They’re very compatible,” said Christine. Pointing out the couple has a significant age difference, Christine said, “As long as they love each other and are comfortable about it, then it doesn’t matter.”