Known for her signature booming laugh, Cutie Mui (梅小惠) established herself as a comedic actress in the 1990s. Although she has starred in many dramas throughout her career, her most notable role to-date was in Virtues of Harmony <皆大歡喜>. After leaving the sitcom in 2004, Cutie took her career in a different direction and is currently working in public relations. 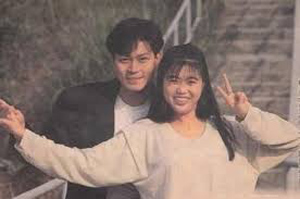 Currently 52 years old, Cutie remains single. The only relationship she was ever in was with actor, Savio Tsang (曾偉權). After 13 years together, the couple broke up in 1999 due to Savio’s infidelity. This led to an amassed sympathy and compassion for Cutie, but also led to Savio’s plummeting image and the end of his entertainment career.

At the time, her good friend and regular on-screen partner, Louis Yuen (阮兆祥), stayed over at her home for one month to watch over her, in fear that Cutie may harm herself. He even vowed to marry her if she was still single by the time she was 50 years old. Though the promised time has come and gone, Louis clarified that the duo never had any romantic feelings for one another. “We are like brothers and view each other as family. We would invite each other and our respective families out for dinner. The statement I made was to comfort Cutie’s family, because she had her heart broken at the time. I was worried her family would be worried, so I said something in hopes of comforting them.”

Cutie briefly returned to the limelight in 2015 to host a radio show. On the show, Cutie candidly expressed her biggest regret, “A change of heart is hardly considered a failure. I think my biggest failure in life is having just one romantic relationship. This is definitely life’s biggest disappointment!”

In regards to her Savio’s cheating, Cutie openly and confidently stated, “Everyone has the freedom to make their own choices. If our relationship did not have problems, then a third party cannot so easily come between us. At the time, I already had a feeling [about our relationship], but after the incident, I was even more sure. I cannot accept gluing a broken glass cup and try to continue using it and pretend nothing is wrong. Even if the cup can hold water, there will always be cracks.”

Cutie further reflected and shared that her life was the most smooth-sailing before her thirties. In her forties, she experienced tumult. After losing her father in 2003, Cutie has learned the need to be grateful and enjoy life in her fifties. Though still single, Cutie continues to lead a fulfilling life and often shares pictures of her vacations and get-togethers with friends.