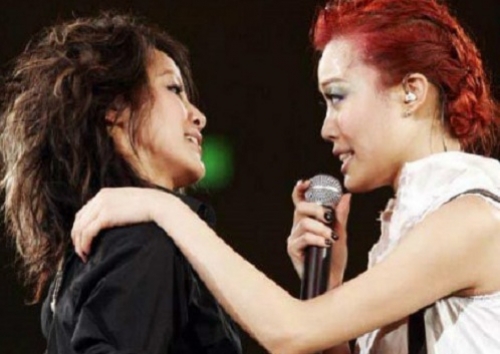 Since declaring herself to be a lesbian at a gay pride parade, Denise Ho (何韻詩), has opened up a floodgate of questions over the sexual orientation of rumored past flame, Joey Yung (容祖兒).

Although Denise’s disclosure of her sexual orientation was supported by fans and her friends in the industry, the public’s curiosity immediately turned towards Joey. In a radio interview, Denise was asked directly whether Joey is bisexual. “It’s very hard to respond. I am unable to respond.” She also refused to clarify the women she had dated.

Denise revealed that she already was certain of her own sexual orientation before entering the entertainment industry. However, she was romantically linked with Wilfred early in her career. Asked whether Wilfred had pursued her years ago, Denise replied, “Let’s not talk about the past and look towards the future instead.” She admitted that both men and women were interested in her.

Joey Yung and Wilfred Lau reportedly vacationed in South Korea earlier and are expected to return to Hong Kong soon.