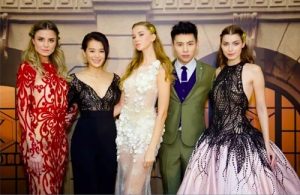 Kevolie designer Kev Yiu (姚子裕), who partnered up with Myolie Wu (胡杏兒) to launch their bridal gown label, recently ranted online about a certain artist. A few days ago, he revealed on both Facebook and Instagram that an actress, who asked for a sponsored dress last year, did not give him credit for the gown.

Then she later told the media that she designed the evening dress herself, and privately complained to others that Kev’s design is rubbish. She told others, “I will not give him publicity” and “No one would know who Kev is if I don’t wear his design.”

Although Kev did not name anyone, he hinted that she was a former TVB artist, who is on the curvier side. His rant prompted netizens to post pictures of Beauty and the Beast and comment, “This picture is related to the incident.”

Kev responded, “I told her not to choose bright yellow, I suggested champagne gold.” 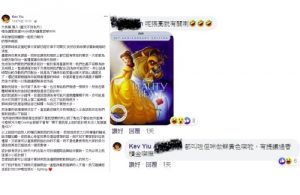 Though there have been many TVB actresses getting married in recent years including Lucy Li (李旻芳), Tracy Chu (朱千雪), Priscilla Wong (黃翠如), Becky Lee (李璧琦), Fala Chen (陳法拉), and Christine Kuo (苟芸慧), only the latter fits the bill. Christine already left TVB, and she held a wedding in Hong Kong. Not to mention, she wore a Belle-inspired yellow evening dress at her Beauty and the Beast-themed wedding.

Christine tied the knot with racer Willliam Luk (陸漢洋) last year in both Canada and Hong Kong. During her castle wedding in Toronto, she wore a dress from the Israeli brand Galia Lahav. She received many goddess compliments, and she even credited Galia Lahav in the wedding pictures she uploaded onto Instagram. On the other hand, she never posted the yellow evening dress that she wore to her Hong Kong wedding on Instagram. It is no wonder netizens believe Christine is the person Kev is criticizing.