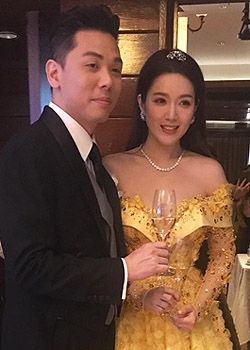 Adhering to the “Beauty and the Beast” theme, William wore a beast mask and Christine changed into a yellow-colored dress at the banquet. Jade Kwan (關心妍) was invited as a guest performer and sang the popular theme song, while the newlyweds danced together and re-enacted the famous scene from the Disney movie.

It may be a strange choice to play the part of a “beast” at his own wedding, but William had said many times that he knew he is not handsome. Always seeing his bride as a goddess with true outer and inner beauty, William felt that their love went beyond looks.

The bride wore a puff sleeve wedding gown, which was romantic and sexy at the same time. The most striking feature were the sheer panels which were hip high, and revealed Christine’s legs with every movement. Her gown also had an impressive 20-feet-long train. Diamond jewelry from Tiffany and Co., which were valued at over $13 million HKD, completed the regal look.

Currently seven months pregnant, Leanne proclaimed that it was her tenth time being a bridesmaid. Leanne said, “This is my last time. All my best friends have gotten married, so I’ve finished my mission. Although Linda Chung (鍾嘉欣) was unable to attend since she just gave birth to her second baby, she sent her congratulations to the newlyweds. 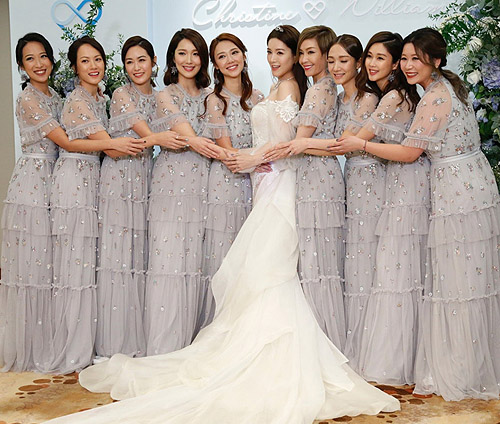 Celebrated Wedding Across Half the Globe

The couple held an outdoor garden lunch buffet, followed by an indoor banquet in the evening. It was Christine’s idea to incorporate the outdoors in her wedding, “I like nature and wanted it to be more fairy-tale like.”

Initially worried about the weather, William admitted he had lost sleep leading up to the wedding, “It didn’t rain and the sun wasn’t too strong. God treated us very well today.” 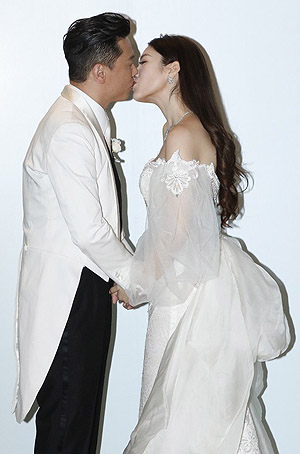 To prepare for their wedding, the couple has traveled half of the globe. They took engagement photos in South Korea earlier. In September, William threw Christine a surprise wedding in Toronto, where the bride grew up. Today’s Hong Kong banquet is actually the couple’s second celebration.

Asked if he had spent a fortune, William said, “I don’t know how much it all cost. We’re very happy to have gone to different places to build our [wedding] memories. We’ll celebrate again for our 10th anniversary.”

Christine Wants to Have Four Children

Feeling very lucky that Christine agreed to marry him, William revealed, “I’m really grateful for how well Christine treats me. I’m not an easy person, but she is tolerant [of my faults]. I’ll try my best to give her happiness!”

He added, “Her father wasn’t ready to give his daughter to me. I promised him to take really good care of Christine. I also told my wife I will at least love her for a lifetime.”

The newlyweds said they would like to enjoy their marriage for two to three years before having children. Christine said excitedly, “I want four children!”

CLICK HERE to see all the photos at Christine and William’s Hong Kong wedding!

CLICK HERE to see all the photos at Christine and William’s Hong Kong wedding!