Since moving back to Hong Kong in November, 19-year-old Etta Ng’s (吳卓林) financial struggles continued. Yesterday, Etta and her wife Andi Autumn were spotted wandering around the streets carrying a large suitcase, backpack and guitar. It appears the couple are looking for a new place to live, but Etta doesn’t want to stay at her mother Elaine Ng‘s (吳綺莉) house. Etta told the press, “I won’t move back home.”

Kicked out and left homeless because of overdue rent last November in Canada, Etta and Andi returned to Hong Kong to see if they would have better luck. Although the couple opened a production studio to do photo shoots for clients, Etta is left with little money to spare in-between payments.

Last month, Etta again made headlines when she owed a hostel late room fees and the police were called in. Etta and Andi resorted to going back home to live with Elaine, who also gave them some money. Despite earlier conflicts with Andi, Elaine reluctantly accepted Etta’s new wife.

Unable to control her daughter, it seems she has given up on lecturing and will “leave everything up to God”. Hoping Etta will mature and be more responsible through self-reflection, it is unlikely Elaine will chase her daughter to return home, especially if that is not Etta’s wish. Since Etta refuses to go back to her mother’s house, their relationship still remains tumultuous.

Etta: “Will Try My Best to Earn Money”

Speaking with the press, Etta admitted that she is looking for a new home. She said, “I’m not going back to my [mother’s] house. I opened a production studio earlier so there is some income. I recently received the payments, so things are okay. It’s just finding a place is hard.”

Etta and Andi are trying their best to earn money. Earlier, they were promoting their friend’s new app on their Instagram. Hopefully the couple’s luck will turn around with the approach of Lunar New Year. 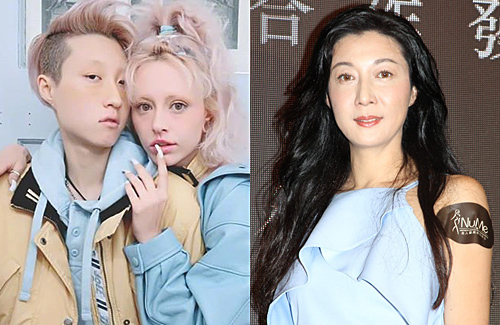 Elaine Ng believes that all of daughter Etta’s problems will work out under God’s plans.