Etta Ng on Father Jackie Chan: “He is a Stranger” 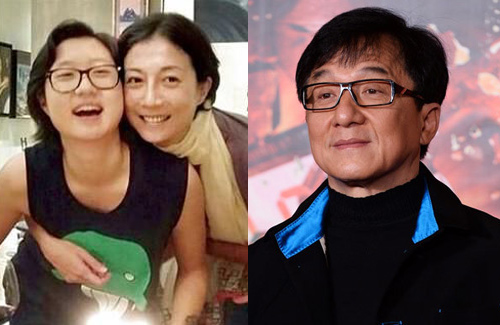 As the illegitimate daughter of Jackie Chan (成龍), 15-year-old Etta Ng (吳卓林) has always been scrutinized by the media. A result of Jackie’s affair with actress Elaine Ng (吳綺莉), Etta was raised by her mother and never had a chance to know what her father is like. Admitting that Jackie “is a stranger” to her, Etta said she never thought about meeting him.

This year, Etta’s relationship with her mother Elaine Ng (吳綺莉) was tested to the limit. Due to Elaine’s alcoholism, Etta had attempted to run away from home several times. Nonetheless, the mother and daughter managed to reconcile and brought them even closer together.

After Etta’s incident, Jackie finally broke his silence on his illegitimate daughter and confessed that he had felt a lot of guilt towards her.

After Jackie’s confession, there were reports claiming that Etta wanted to see her father, but the 15-year-old clarified in a recent interview that the rumors were false. Although she is not against the idea, she never thought about wanting to see her father.

While she does not mind the media calling her “Little Dragon Girl”, she said most of her close family and friends just call her “Etta” and do not associate her with Jackie at all.

Wondered Why She Has No Father

“I don’t have a father,” said Etta. “The one who raised me is more important.”

Etta admitted that there were many times when she questioned why she was fatherless. The saddest moments in her childhood occurred when her classmates talked about the activities they did with their fathers, while Etta had none to share.

However, Etta said she never had any anger for her father. “I don’t have any feelings for him,” said Etta. “I am used to life without my father.”

Etta once asked her mother why she did not have a father, but after hearing what Elaine had to say, Etta said having a mother is enough. Etta feels fortunate to have Elaine who  can take on the responsibilities of both mother and father. “I rarely say ‘I love you’ to my mother. I usually say ‘I care about you’, because I feel that ‘care’ carries more meaning than ‘love’. I hope my mother can live life happily.”

It has never been a secret that Etta is the illegitimate daughter of Jackie Chan. Because of her identity, she was often physically and mentally bullied at school. Etta became shy, introverted, and hesitant to make friends. Because of her relationship with Jackie, Etta feels hesitant to pursue her true passion — filmmaking. As both of her parents are actors, Etta is afraid that her decision to pursue filmmaking would create more gossip for her family.

Asked if she has watched any of Jackie’s films before, she said, “I don’t know him, so I will not critique him. He was never in my life, so when I see him in film, he is just a stranger to me. I never say he is my father. I just say he is Jackie Chan, an actor.”

11 comments to Etta Ng on Father Jackie Chan: “He is a Stranger”