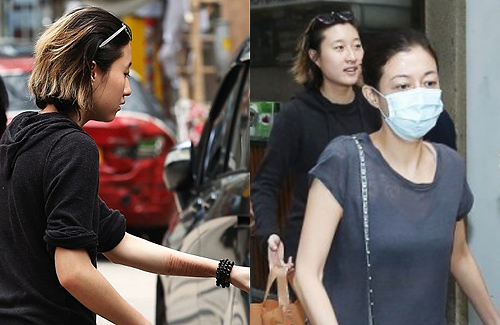 Single mother Elaine Ng (吳綺莉) has not only had a tumultuous relationship with Jackie Chan (成龍), but has also been struggling a maintain a good relationship with her 17-year-old daughter, Etta Ng (吳卓林). In March, Etta reported her mother to the police on claims of threat, resulting in Elaine’s arrest. This was Elaine’s second arrest within three years due to arguments with Etta. After coming back from vacation in Thailand, Etta reportedly attempted suicide and was rushed to the hospital.

Etta has been hospitalized for the past two months and was under careful monitoring by doctors and social workers. Etta was finally released from the hospital a few days ago and reunited with Elaine.

The mother and daughter seemed to have reconciled and were recently spotted out shopping. When Etta noticed reporters, she immediately pulled down her shirt sleeves, but was not quick enough. Sharp-eyed reporters noticed more than 20 cuts on her wrist. On whether she had scolded her mother, Etta firmly said, “No! I never have!”

When contacted later about Etta’s return home, Elaine said, “Of course I’m happy! My daughter has returned home now. I am very relieved!” Etta still needs to routinely check in with a social worker, but mother and daughter are relearning how to cope and live with each other. Elaine explained, “The social worker advised me about time outs. If we have conflicts again, we both need to walk away and take a breather. Give each other some space to calm down! We are communicating and are getting along fine!”

34 comments to Etta Ng Spotted with 20 Cuts on Wrist