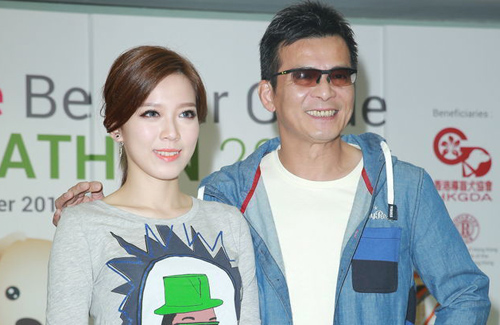 Felix Wong (黃日華) and his daughter, Adrian Wong (黃芷晴), attended a charity event for the Rotary Club walkathon earlier. Having turned 53 years old on September 4, Felix revealed that he celebrated his birthday as well as the Mid-Autumn festival together with his family.

After burning bridges with TVB, Felix and Adrian joined Ricky Wong’s (王維基) HKTV station. Since HKTV failed to obtain a broadcasting license, Felix and Adrian’s series have not aired yet. Although Felix’s popularity still helped him secure jobs, he was reported to be be frantically scrambling for funds. The medical bills piled up after his wife Leung Kit Wah‘s (梁潔華) was hospitalized several times last year for leukemia.

Denying that he has been going through a financial struggle, Felix explained that his wife worked as an insurance broker for 20 years, so the entire family has enough coverage for medical emergencies. Felix stated that he did not pay a single dime out of his own pocket.

Opting to have a simple dinner with his family for his birthday this year, Felix invited Adrian’s boyfriend to join them for the occasion. Revealing that his daughter has been in a steady relationship for three years now, Felix praised his future son in-law as very filial and nice.

Maintaining an optimistic outlook and positive attitude, Felix disclosed that Kit Wah’s health have been very good lately and she is currently getting a lot of rest in order to regenerate her health. With nothing much to wish for, Felix said his only birthday wish this year is for his family to have good health.