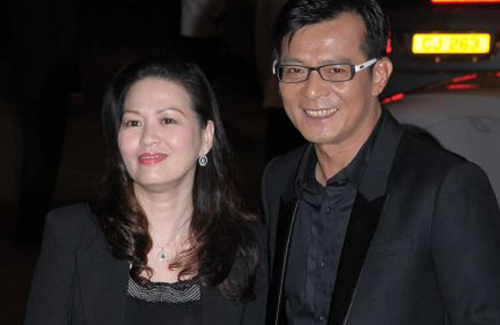 Felix Wong’s (黃日華) wife, Leung Kit Wah (梁潔華), was recently released from the hospital after a long stay. Diagnosed with scurvy, a disease resulting from vitamin C deficiency, the former actress  has been frequently returning to the hospital for routine medical check-ups in the past few months.

In November 2013, Leung Kit Wah was admitted to the intensive care unit of the Hong Kong Baptist Hospital. Though Leung Kit Wah’s condition has been steadily improving since then, her recovery is slow and she had to spend her 25th wedding anniversary with Felix in the hospital. The hospital discharged her in time to celebrate the 2014 Lunar New Year, but on the third day, Leung Kit Wah suffered a fever and was immediately sent back to the hospital.

Felix and Leung Kit Wah’s daughter, Adrian Wong (黃芷晴), turned 24 years old on May 2. Wanting to celebrate her daughter’s birthday at home with her family, Leung Kit Wah was discharged from the hospital in early May. However, as the Wongs keep two dogs at home, Leung Kit Wah was unable to stay at the family house due her weaker immunity as the bacteria from the dogs’ fur may irritate her condition.

Felix arranged Leung Kit Wah to stay at a nearby hotel in New Territories. Felix chose the quiet location because it is far from the main city and is not easily spotted by the paparazzi. It is also close to their independent house in Tai Po, making it more convenient for the family to visit her frequently.

Felix was recently spotted taking Leung Kit Wah back to the hospital for her two-week routine checkup. Leung Kit Wah looked noticeably skinnier – reportedly having dropped over 25 pounds – but she was still strong enough to walk around without support. Felix revealed that his wife’s medical checkup is almost complete and that she is recovering well. He thanked the press for their concerns.