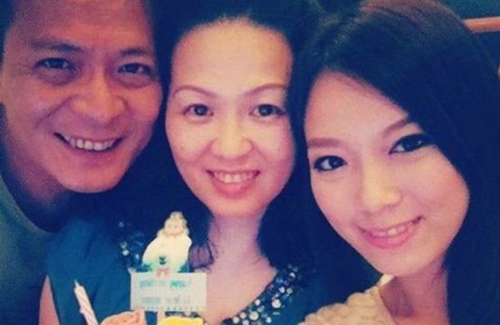 Above: Felix Wong with wife and daughter.

Felix Wong’s (黃日華) wife, Leung Kit Wah (梁潔華), was suspected of being diagnosed with leukemia after entering the hospital at the end of November due to constant fevers. Insiders revealed she had undergone chemotherapy for more than a month now and has lost much weight and hair.

According to reporters, Felix and Chi Ching visited Leung Kit Wah in Hong Kong Baptist Hospital for two hours each night regardless of their busy schedules. Allegedly, they never informed their friends and colleagues about Leung Kit Wah’s situation. At work, Felix maintained a joyful mood and appeared cheerful despite his worries. Even close friends, Michael Miu (苗僑偉) and Jamie Chik (戚美珍), were unaware of his wife’s health condition.

However, when questioned about Leung Kit Wah’s conditions today, her daughter, Wong Chi Ching (黃芷晴), denied all reports that her mother suffers from cancer. Chi Ching remained discrete about her mother’s exact illness, “My mom is okay! It’s not that severe, and she did not undergo chemotherapy. She never even had a fever.” Earlier tabloids claimed Felix and Leung Kit Wah had to spend their 25th wedding anniversary in the hospital on December 7. Once again, Chi Ching denied and clarified they celebrated the night at home together with a simple family meal. “My mom did not enter the hospital until the middle of December.”

Felix hopes that Kit Wah can leave the hospital before Lunar New Year. Felix did not wish to reveal the details of Kit Wah’s illness, but remained positive that she will get better. “She’s recovering well. I will talk about it at an appropriate time.”