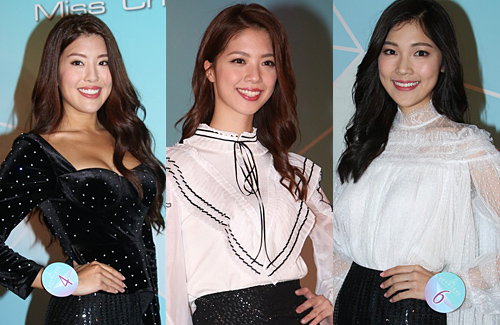 Stephanie, Hera, and Jovane are the standout contestants so far.

The 19 contestants for the Miss Chinese International 2019 Pageant had their first press conference today. There were two contestants that caught the attention of the media and are viewed as Miss Hong Kong winner Hera Chan’s (陳曉華) strongest competitors!

First is 27-year-old Stephanie Wang (王慧媛) representing Hawaii. With her bronzed skin and voluptuous figure she instantly caught the eye of many. Her Instagram page is full of bikini modelling shots proudly showcasing her figure. She explained that she grew up in Hawaii so she loves the sun and beach. Her favorite activities are tanning and swimming in the ocean. In order to maintain her figure, Stephanie trains almost daily at the gym. When asked which part of her body she is most proud of, she answered, “My legs! When I was younger, my mother would tie up my legs in hopes that they would develop without a curve.” Stephanie is also a pageant veteran; she is a strong threat with her experience combined with her figure.

Second is Jovane Phang (彭嘉伊) representing Malaysia. She has been labelled as the most elegant contestant and even 2017 runner up Serene Lim (林宣妤) has praised her for her grace and said that she would love to see her in person! Jovane not only won Miss Chinese Malaysia 2018 but she also scooped up three other awards that night making her a very strong competitor. Jovane has not started a career in Hong Kong yet, but fans have already created a fans club and she has a burgeoning 104,000 followers on Instagram.