Fred Cheng and Stephanie Ho Are Rumored To Be Dating 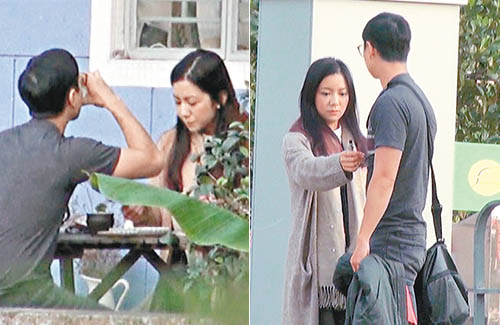 Sparks are said to be flying between Fred Cheng (鄭俊弘) and Stephanie Ho (何雁詩), who were caught out on a date a few days ago. The two TVB singers reportedly grew close after collaborating in the theme song for Married but Available <我瞞結婚了>. They played a couple in the song’s music video.

Stephanie, who was in Beijing to film Succession War <天命>, returned to Hong Kong a few days ago, reportedly to meet up Fred. Paparazzi first saw Fred driving Stephanie back home to her apartment in Tai Po, where they stayed for a while. Four hours later, Stephanie drove Fred to a nearby village, where they met up with Winki Lai (賴慰玲). While waiting for Winki, the rumored couple stood close together by the sidewalk and chatted. At one point, Stephanie brushed something off of Fred’s chest. When Stephanie started to smoke on her e-cigarette, Fred stepped away. Winki arrived a few moments later, and the trio went into a cafe.

Fred and Stephanie immediately bounced off from each other after seeing the reporters. Fred, who originally came in Stephanie’s car, called someone to pick him up. Asking why Fred isn’t going home with Stephanie, he said, “I have work.”

Stephanie accepted a phone interview later to clarify the rumors. “Fred took me back home that day because I had a lot of drinks. It’s a common courtesy.” (Does Fred always go to your home?) “Several times.” (Are you two dating?) “We are friends. Don’t make everything seem so dramatic. It gives us a lot of pressure.” (What do you think of Fred?) “He’s a great guy. I love guys with a good singing voice. This is a quality I’ve always admitted to admiring.” (Has Fred met your mother?) “She met him when my mother visited me on set.”