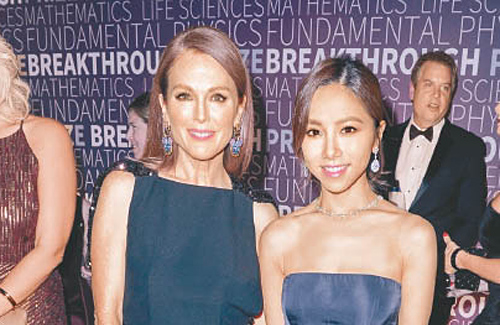 Having been invited to the NASA Breakthrough Prizes Awards ceremony, G.E.M (鄧紫棋) is the very first Asian artiste to hit the stages as a guest performer.

Having walked the red carpet among international superstars such as Pierce Brosnan, Julianne Moore, Eddie Redmayne, Orlando Bloom, Zoe Saldana, and Lupita Nyong’o, G.E.M expressed her excitement to have been given this rare opportunity to represent the Chinese music culture. Performing her own written song, “Light Years Ahead” <光年之外>, G.E.M wowed the audience with her steady and beautiful performance.

Accepting an interview on the red carpet, G.E.M. expressed that she has been an avid fan of science since she was a child and chemistry was a field that interested her the most. On performing at the same event as singer Lionel Richie, G.E.M smiled, “I’m extremely flattered to have been chosen to perform – I’m singing my own written song and I never thought there would be a day where I could bring a Chinese song onto an international stage. I’m very excited. The most meaningful part of this performance is so that we can encourage some of the world’s greatest contributing scientists. It’s an absolute honor to be part of this event in celebrating some of the finest scientists in the world.”