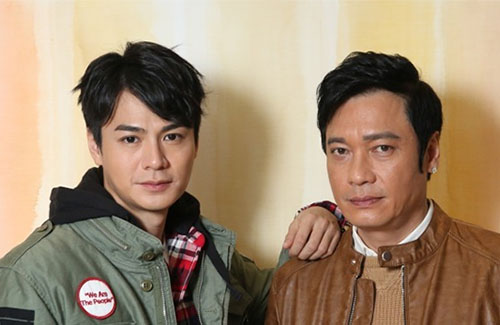 Gallen Lo (羅嘉良) and Him Law (羅仲謙), costars in Infernal Affairs <無間道>, sat down together for an interview to promote their new TV series, which takes place in the same universe as the 2002 Hong Kong film of the same name.

Both Gallen and Him are married men, and both of their wives are also actors in the entertainment industry. Though Gallen and Him are over twenty years apart, the costars showed no generation gap in their conversations, as they both share a common passion in loving their family.

Gallen and his wife Sophie Su (蘇岩), who he has been married to since 2009, have one four-year-old daughter Sela. On how he manages his time between family and work, Gallen shared, “Our daughter is turning five soon, and my wife hasn’t been working as much as before. I’ve been working less as well.” Him joked, “That’s because he’s made enough to retire!” Gallen quickly clarified, “It’s my wife telling me not to work as much!”

The 55-year-old said he wants to enjoy his time with family, which led to his decision of doing about one TV show per year. Asking if his wife would having acting cravings, Gallen said, “Of course, but our daughter is still very young, so we don’t want to be away for too long.”

Him, on the other hand, has actually been working more since his marriage to Tavia Yeung (楊怡). Him joked, “She told me to work more!” The 33-year-old then added that he should be working harder, saying, “I can’t stop now. Times have changed. The market and competition is now all of Asia. I need to hold onto every opportunity that I come across.”

Pointing out that Tavia has slowed down her work output, Him said, “Like Gallen Gor, Tavia is able to come out if she finds a good production or script to work with. It’s an 180 degree change from before we got married. She has gone from working all year to now working only once per year.”

Though it’s not the first time that Gallen has played a villain, the veteran actor finds his role as “Hon Long” to be his most challenging role yet in a TV drama. “Acting does get harder and harder,” he shared. “You have to show something different every time. For Hon Long, I had to tone down his body language a bit. That actually made his character harder to portray.”

Him said Gallen was a good mentor on set, and shared some of the tips that Gallen had taught him. “He told me my eyes are too black and white. Very alert and shiny. When it comes to playing complicated roles, that feature becomes a weakness. I had to learn how to make my eyes less ‘clean’.”

The Infernal Affairs star, who plays Senior Inspector Wai Chun-hin, then added, “I don’t know if it was a random coincidence or what, (Gallen: “It’s not. You were doing your homework.”) but I’ve realized that if I don’t sleep enough, I’ll achieve that look!”