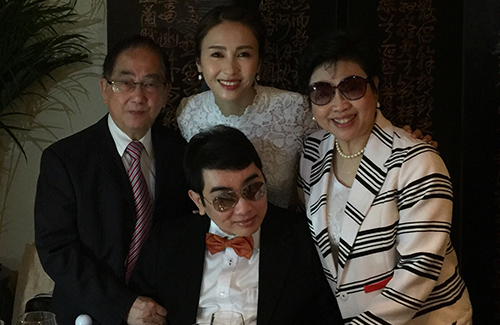 October 1 is not only China’s National Day, it is also Gigi Lai’s (黎姿) birthday. The former TVB actress celebrated her 44th birthday on Thursday with her family at a restaurant near Victoria Harbour, where they also enjoyed Hong Kong’s National Day Fireworks.

On Thursday afternoon, Gigi’s husband, businessman Patrick Ma (馬廷強) was seen in Wan Chai alone, without Gigi by his side. The reporters asked Patrick about what he was planning to do for his wife’s 44th birthday, to which the businessman replied that nothing had been set, but they would be eating out for dinner.

That afternoon, Gigi went on her Weibo account and uploaded a few photos of a birthday gift she received from the French jewelry manufacturer Cartier. Her last Weibo update was in May 2015, when she celebrated Mother’s Day. Fans were happy to see Gigi updating her Weibo again, and sent in many birthday blessings. They left behind many encouraging comments, and also reblogged many of Gigi’s older photos, reminiscing the days of when she was still acting.

Gigi had dinner with her family at a restaurant near Victoria Harbour, where the National Day Fireworks were launched. On the early morning of October 2, Gigi shared seven pictures of her intimate birthday event, which she spent with her close family members. The pictures included her parents, her younger brother Lai Ying (黎嬰), as well as a glimpse of the back of her oldest daughter.

“Dearest father and mother,” Gigi wrote on her Weibo. “Thank you for bringing me up all these years. Forty years ago on October 1, you two brought me into this beautiful world. I hope that I would be able to spend my birthday with you two every single year. Love you.”