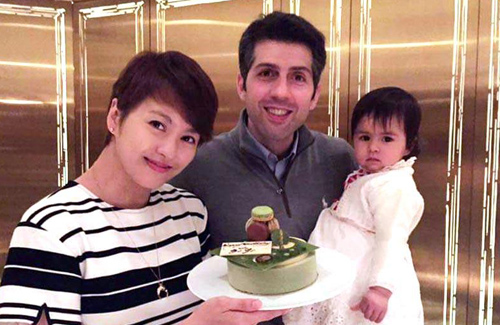 Meeting through mutual friends by chance in Barcelona, 39-year-old Gigi Leung (梁詠琪) and food engineer Sergio Crespo Gutes have been married for more than four years now. Since getting married, the couple tried for several years to conceive before Gigi successfully got pregnant and gave birth to Sofia in 2015. Turning 40 years old recently, Gigi shared many photos and blissful reflections about motherhood.

Celebrating her birthday last week with her husband, daughter, and younger brother, Gigi took many photos at the dinner gathering to capture the happy family moments. Her birthday wish is simple, as Gigi only wants “family health and world peace”. If fans want to send her birthday gifts, Gigi urged them to help charities in need instead.

Sofia’s first birthday was celebrated earlier in February, and Gigi cherished many of the milestones the first year brought. Gigi said, “Watching you grow every day this year, I experienced the miracles of life! Thank you for bringing boundless joy to our family!”

As Sofia is a curious child, she is especially excited when she sees other babies. Gigi said, “When Sofia saw a baby that was smaller than her, she was dumbfounded! Actually, you [Sofia] were also that tiny at one point!”

Many netizens left delightful comments, complimenting on Sofia’s cute and adorable features. Sofia, who is of mixed Chinese and Spanish ancestry, closely resembles her father.