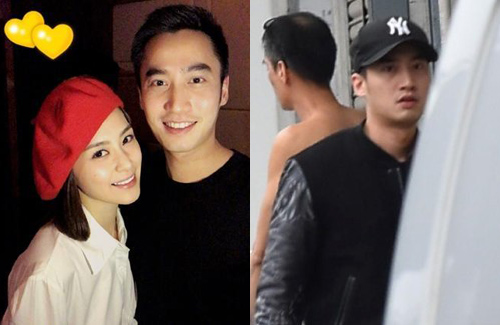 Since her debut as a one of the two Twins popstar duo, Gillian Chung (鍾欣桐) has been the dream girl of men both in and out of the entertainment industry. Although Gillian’s other relationships may have been overshadowed by her ex-boyfriend, Edison Chen (陳冠希), she had also dated Juno Mak (麥浚龍), Alex Fong (方力申), Chun Fen (秦奮) and Korean actor Tyler Kwon. After several failed romances, did Gillian Chung (鍾欣潼) finally find Mr. Right in Taiwanese doctor Michael Lai (賴弘國)?

The 32-year-old medical professional was previously married to a stewardess who was dubbed as an Ariel Lin (林依晨) lookalike. Their marriage eventually fizzled out and they divorced six months later.

Gillian did not seem to mind and openly acknowledged the relationship in October. “We have not known each other for very long, but he is very caring towards me. He makes me feel loved. Although he is a very busy person and flies around a lot, he still makes a great effort for us to get to know each other. Although my previous relationships have been tumultuous, I still believe in love. I hope I can have everyone’s blessing this time. I hope this relationship will blossom into something more.”

Despite being in a long distance relationship, the couple often makes time to visit one another. Michael was recently spotted in Hong Kong entering Gillian’s home in Sai Wan. After purchasing coffee, the Michael drove Gillian’s car to pick her up from work. Perhaps afraid that the high-profile publicity will ultimately damage her newfound romance, Gillian stalled when she spotted reporters and did not enter the vehicle until her assistants provided enough cover.

While Michael was in Hong Kong, Gillian also brought him to Charlene Choi‘s (蔡卓妍) 35th birthday celebration. Although the party was mainly by EEG stars Joey Yung (容祖兒), Yumiko Cheng (鄭希怡), Nicholas Tse (謝霆鋒) and Kenny Kwan (關智斌) Michael fit right in and seemed to get along very well with Gillian’s friends.

12 comments to Gillian Chung Gushes Over New Boyfriend: “He Makes Me Feel Loved!”