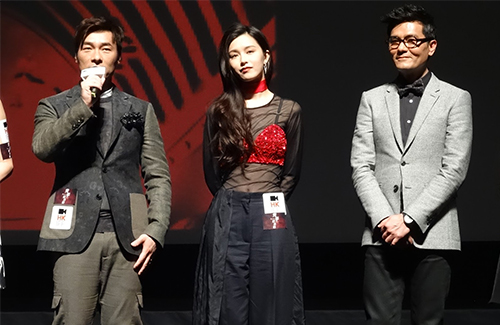 The Hong Kong psychological thriller Nessun Dorma <兇手還未睡>, directed by Herman Yau (邱禮濤), was released in theaters on October 27. The film stars Janice Man (文詠珊) as a woman thrusted in a complicated relationship between her husband, portrayed by Gordon Lam (林家棟), and her lover, portrayed by Andy Hui (許志安). In the film, JM suffers domestic violence by Gordon. She also has a bed scene with Andy.

It was hard for JM to get out of character. Traumatized by her character’s fate, JM had insomnia during the production of the film. She struggled to stop crying after a scene which had her violently beaten by Gordon. Gordon himself was shocked after completing the scene, and even asked himself if he had went too far.

“It frightened me,” the actor admitted. “I didn’t think I’d go that far, but I couldn’t hold back once I got into character. I didn’t think about it too much when we were shooting it, but after the director yelled cut, the entire studio went quiet. Janice couldn’t stop crying. Her manager was with her. Even some of the staff said I went too far.”

JM defended Gordon and said, “I told Gordon to not hold back. I rather finish everything in one take than do it multiple times in several takes. In the end, we went through two takes. In the first take, I fell to the floor so we had to redo it. After finishing the scene, it was hard for me to remove myself from that environment. I just sat there and cried for ten minutes. Everyone was shocked and scared!”

In addition to the violence, JM also had to do a rather explicit sex scene with Andy. Needless to say, the two friends stayed professional during the potentially awkward moments, and finished their scene in only a few takes.

“JM starred in one of my MVs before,” shared Andy. “She played my lover, and we were supposed to kiss, but that scene got scrapped. I just wasn’t expecting us to take it to a different level in film.”

Andy praised JM’s professionalism, as her dedication to the role really made his job much easier. “Despite the fact that most of the crew around us were men, JM wasn’t awkward and even suggested a retake. She is a perfectionist. I really hope to get to work with her again.”

The singer said he would like to take part in more different films in the future, saying, “I’d like to do more roles that is different from my own character. The more challenging the better.”