Grace Wong Kisses Her Husband as Her Reward 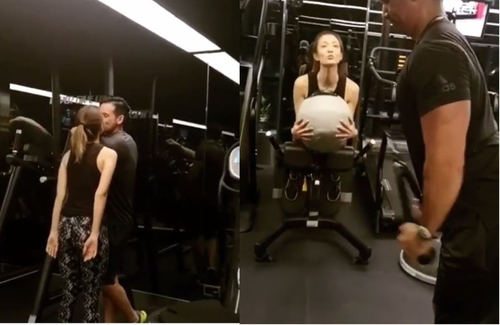 At long last, “Virgin Gang” members Grace Wong (王君馨), Linda Chung (鍾嘉欣), Leanne Li (李亞男), Eliza Sam (岑麗香), and Christine Kuo (苟芸慧) have all become wives as of last year, and Christine and Grace are the only ones without children or buns in the oven. However, having married her longtime boyfriend Daniel Chang less than two years ago, Grace does not seem to be in a rush to get pregnant. Instead, she puts all her energy into working out to maintain her physique.

Recently, the actress shared a clip of her and Daniel working out at the gym on social media. In the video, Grace was exercising with a ball while facing her husband and puckering up her lips every time she lifted herself up, but Daniel paid no attention to her as he was working out, and even left when he was done.

Grace was noticeably disappointed by his indifference, and the coach was heard saying, “Oh, She wants a kiss, Daniel, come on!” Daniel only smiled while looking at his wife but did not walk over to give her a kiss. Thus, Grace turned her anger into motivation and quickly finished her set of lifts so she could receive her “reward.” She quickly rushed over to her husband and planted a kiss on him. Grace humorously captioned the video, “Ladies, please don’t drool over guys at the gym, unless that fineee man is yo husband.”

Netizens left positive feedback on the video, commenting on the pair’s sweetness and complimenting Daniel for his handsome appearance and Grace for her cute action.

1 comment to Grace Wong Kisses Her Husband as Her Reward