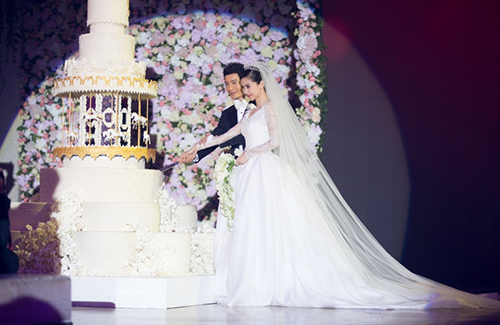 Power couple Huang Xiaoming (黃曉明) and Angelababy held their “wedding of the century” at the Shanghai Exhibition Center on October 1. Over 600 guests witnessed Xiaoming and Angelababy exchanged their vows. The venue was transformed into a grand ballroom with a castle backdrop, and was described as a “fairy tale wedding” by the media. Sources say that Xiaoming and Angelababy spent over 200 million RMB for the wedding.

The jaw-dropping wedding of the century received intense media coverage, topping entertainment headlines all over Asia. It stayed as a hot trending topic for many days, making it one of the most high-profile wedding ceremonies of the year.

While many friends and colleagues gave the beautiful couple their blessings, not everyone was impressed. Famous Chinese talkshow host, Jin Xing (金星), posted a message on her Weibo lambasting the couple for their decision to make their nuptials so high-profile. She said their wedding had become nothing more but an over-the-top entertainment show for the world, implying that their reunion lacked sincerity.

The talk show host said, “Jay [Chou] gave Hannah Quinlivan a wedding. Xiaoming gave the media a wedding. What else can be said?”

Her message sparked intense debate among netizens. Some agreed that the wedding played out like a glamorous show, while others supported Xiaoming, believing that everything he did was out of true love for Angelababy.

One of Xiaoming’s groomsmen, Zhang Shuai (張帥), criticized Jin Xing for using Xiaoming and Angelababy’s wedding to promote her own show. He defended the couple and replied to Jin Xing’s message, “For your program, you also didn’t have it easy. We’ll all help you out then! But do not hurt good people. If walking down the red carpet and giving the media a wedding can make the person more popular, then you can stop acting so straightforward! I cannot stay quiet anymore!”

Jin Xing posted another Weibo message in response, “Please read carefully before attacking me. If you have guts, come say it in front of my face. Big sister will be waiting!”

Xiaoming posted a statement on his Weibo amidst the controversy, expressing his love for Angelababy and his desire to give her a perfect wedding. He explained, “I wanted to let her know that her decision to marry me was the correct choice.”

The 37-year-old actor said he did not feel bothered or upset at Jin Xing’s comments. He even shared that he and Angelababy had a happy dinner with his family a few days ago. They also ate dinner with the representatives of the charity fund that Xiaoming established in Angelababy’s name.