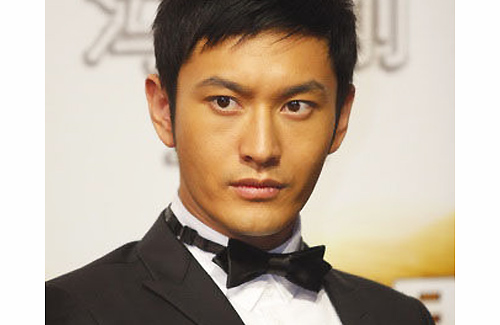 In Taiwan, it was the singers who made it to the highest-paid celebrities list. In mainland China, it was the actors.

In recent years, many artists have established their own production studios in mainland China, reinvesting their wealth back into the industry that has rewarded them. Mainland China’s five best-paid celebrities of 2012 are not considered to be superstars, but through their prudent investments and diligent work ethics, they have managed to scurry up the list of highest-paid celebrities of the year.

Huang Xiaoming is our highest-paid celebrity of the year, earning a total of 392 million RMB in 2012. Xiaoming established his production studio in 2011; the film An Inaccurate Memoir <匹夫> was the studio’s first project. Aside from handling the business aspects of his studio, Xiaoming also filmed movies and invested in real estate, stocks, and other businesses.

Taiwanese actor, Nicky Wu, is our second best-paid celebrity, earning over 200 million RMB this year. Having invested in two successful television dramas, Nicky’s production studio, established in 2011, is one of China’s most successful private studios of the year. The distribution rights for Nicky’s 42- episode The Bride With White Hair <新白发魔女传> totaled 2 million RMB per episode, earning about 84 million RMB in the mainland Chinese television market. With the addition of Nicky’s 40-episode Advance Towards the Fire <向着炮火前进>, his production studio earned about 160 million RMB this year.

Fan Bingbing comes to a close third after Nicky, earning about 200 million RMB this year. Fan Bingbing’s production studio was established in June 2007, and it has since invested in over five television dramas. The studio’s latest production, Chinese thriller Double Xposure <2次曝光>, earned 100 million RMB in the Chinese box office. Fan Bingbing Studio currently has 15 staff members, including one manager, one promotional director, one assistant, cameramen, and stylists. Managed and collaboration artists include Wang Xueqi (王学圻), Eric Huang (黄少祺), and Han Xiao (韩晓).

Li Bingbing’s production studio was established in November 2009 and has a close partnership with Huayi Brothers, Li Bingbing’s management company. The studio’s main income in recent years is through Li Bingbing’s films and endorsements. This year, Li Bingbing earned 180 million RMB, making her fourth on our list.

Fifth on the list is Taiwanese actress, Ruby Lin. Established in 2009, Ruby’s studio produced The Glamorous Imperial Concubine <倾世皇妃> in 2011. The studio’s second production,Drama Go Go Go <姐姐立正向前走> is currently airing on Hunan Satellite TV. The distributions rights for the 30-episode Drama Go Go Go went up to 2.5 million RMB per episode, totaling 75 million RMB. Although Ruby seldom films movies or endorsement commercials, she managed to earn over 90 million RMB this year through her studio alone.