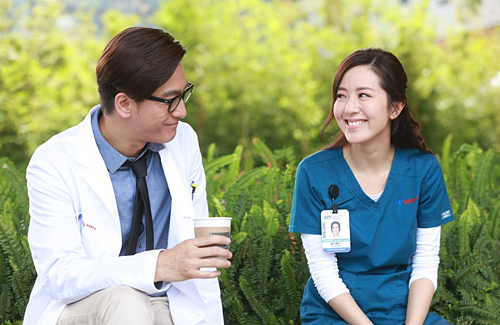 TVB medical drama Big White Duel <白色強人> aired its first episode Monday night and was met with many compliments for its accuracy and fast-paced action.

The first episode starts off with a multi-car crash accident where doctors Kenneth Ma (馬國明) and Natalie Tong (唐詩詠) immediately help the victims. The camera then pans to the emergency room at the hospital, where the doctors are faced with a variety issues, including a case where a little girl who cut herself, a construction employee that fell, a young lady who suffers from anorexia, and an athlete suffering from food poisoning.

The drama also received a lot of praise for how realistic some of the scenes were. In order to showcase a more realistic surgery room, the production crew even used actual medical machines.

Besides the medical cases, Big White Duel will also be focusing on how the characters’ lives intertwine– including Kenneth’s friendship with Natalie, Roger Kwok’s (郭晉安) troubled relationship with coworker John Chiang (姜大衞) and his mysterious relationship with Ali Lee (李佳芯). Kenneth’s character will eventually violate the Hippocratic Oath, while Ali skirts a gray line in her climb to the top.

Despite having a strong start and most viewers are very excited for the upcoming episodes, Big White Duel is found to bear similarities to Japanese medical drama Doctor X due to Kenneth’s unorthodox ways and Team Medical Dragon for the politics portrayed inside the hospital.