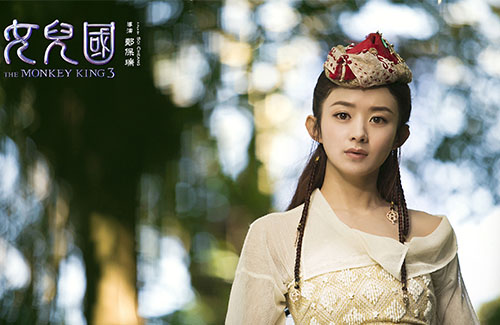 The Monkey King 3 <西游记女儿国> actress Zanilia Zhao Liying (赵丽颖), who plays the Queen, has no limits when it comes to acting. Despite rumors indicating that Zanilia has an overabundance of body doubles, the 30-year-old Chinese mega star is known for her dedication to her craft.

She prefers doing her own action sequences and does not mind taking on physically-demanding roles. When she was filming the 2013 movie The Palace <宫锁沉香>, Zanilia injured her spine from horseback riding. The injury had lasting effects—she cannot stand for long periods of time and had to take frequent sitting breaks. An insider told the media that whenever Zanilia is not on camera, she had to sit down.

Though her horseback injury traumatized her, Zanilia insisted to film a horseback riding scene when filming last year’s hit drama Princess Agents <楚乔传>. For her role, Zanilia slimmed down from 94 jin (124 lbs) to 80 jin (105 lbs).

The injuries have not prevented Zanilia from working more, however. This year, Zanilia has eight productions waiting to be released, and her popularity has reached another new height.