Is Marriage on the Cards for Mandy Wong? 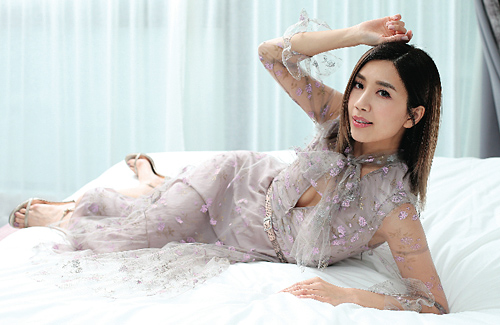 The actress will set a serious date for her wedding if she wins TVB Best Actress.

Quitting her well-paying job as a flight attendant to sign up for acting classes after two years, Mandy had her family’s unconditional support all along. Despite growing up in a single-parent family, she received lots of love from her mother, grandmother, and aunt. “Since young, my family would allow me to pursue my passions, such as dancing or acting. Some parents might wish their children to pursue professions where they can earn more…but they have supported me 100 percent with no grudges.”

Mandy has also been taught by her mother to achieve financial independence since young. “My mom has a beauty salon and earns her own keep as she doesn’t wish to be my burden. I too hope to earn more to give her a better life.” Tearing up at the mention of her mother, Mandy shares that she often misses her mom’s messages due to her busy schedule. However, Mandy’s mom never blames her and would learn to go online to catch her “live” broadcasts, telling her daughter how pretty she looked in her outfits later on.

Clear About Her Passion

Though being a flight attendant was a well-paying job with lots of travel perks, the two years Mandy spent in her previous job made her more convinced of her passion in acting. She recounts an incident which pushed her to make the career switch – “It was a long-haul flight, about 3 or 4 a.m. and we were taking turns to rest. I was on standby in the kitchen preparing cup noodles for passengers. Sitting down on the floor which was freezing, I couldn’t put on a jacket. The lights were off and everyone was asleep – at that moment I asked myself why was I sitting (there)? Do I have more important things to (chase after)?”

Mandy has always been tight-lipped about her boyfriend of six years, Anthony, who is an executive at a jewelry company. Last May, Paisley Wu (胡蓓蔚), one of the members of The Nonsense Club, revealed that their group has an upcoming “Big Project”, which many guessed to be Elaine Yiu‘s (姚子羚) wedding at the time. After Elaine split with her boyfriend, Mandy is the only one who might be getting married soon.

With her mother having a favorable opinion of Anthony, Mandy feels that she is ready for the next step in her life. “We have been dating for a while now and are pretty stable. It’s been six years and he allows me to do what I want. Both of us are more forward-thinking, and don’t care much about traditional rituals. We may [not have a banquet] if we were to get married.”

Influenced by the loving marriages of good friends such as Myolie Wu (胡杏兒) and Paisley, Mandy hopes to emulate them. “Especially Paisley and her husband, though they don’t have kids, you can tell the love sparks between the couple. They are examples for me to learn from.” Adding that the friends like to share photos of pretty bridal dresses when they see them, Mandy said she would “seriously consider setting a date” for her wedding should she win the TV Queen award, as it would be “an important milestone of recognition” for her career.

2 comments to Is Marriage on the Cards for Mandy Wong?