There’s a big shake up happening at Jay Walk Studio, with rumors flying that a top artist is looking to leave the agency.

Jay Walk Studio, co-founded by Chinese actress Yang Mi (杨幂) in 2013, is known for cultivating stars such as Dilireba (迪丽热巴), Vin Zhang (张彬彬), and Gao Weiguang (高伟光). It was the force behind 2017’s hit series Eternal Love <三生三世十里桃花>, the series that kickstarted the fame of many of Jay Walk’s in-house artistes, specifically Dilireba.

But despite the studio’s popularity, it never managed to succeed the impact of Eternal Love. The studio is criticized for its allegedly poor management of Yang Mi and Dilireba, two of China’s highest-paid actresses.

Many fans of the two actresses are upset with the trajectory of their careers—Dilireba hasn’t filmed a new drama series in over half a year, and Yang Mi, once known as the nation’s “ratings queen”, is suffering from poor critical performances of her newer dramas, such as Negotiator <谈判官> and The Great Craftsman <筑梦情缘>, both receiving less than 5 out of 10 on China’s biggest TV and film aggregator Douban. Their fans accused Jay Walk for poorly managing their resources, and criticized the studio for placing strong restrictions on it artistes—Dilireba once revealed in an interview that she does not have the freedom to choose her scripts. 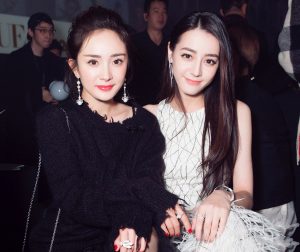 The rumor of a Jay Walk artiste walking out of the studio came from a private WeChat Moments exchange. The vice president of Jay Walk Studio had shared, “We sincerely devoted many years to help you fulfill your dream! Alas, it ends in sorrow. I believe that the selfish will never have a future.”

This bitter message has left many netizens to speculate that the vice president could be referring to either Yang Mi or Dilireba, two of its highest earning stars. While Yang Mi is a co-founder of Jay Walk, she only owns a small percentage of the shares, and does not have complete control over her contract.

The vice president, however, was quick to clarify the original message: “I’ll only give this general response: it is not Xiao Mi nor Reba. They are successful because they know what they’re doing.”

Reporters asked for further clarification from the studio. The rep reiterated that the vice president was only professing her thoughts on an issue, and that it has nothing to do with an artiste leaving the company.