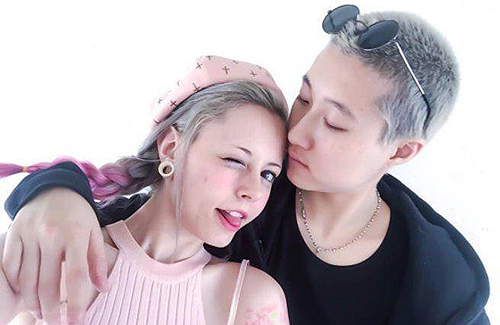 Etta said that 2017 was a difficult year for her, which made her appreciate Andi’s love and support even more. “I encountered many events that could have broken me, but in actuality, you strengthened me. You are my everything and more. I love you, my princess. Let’s celebrate our nine-months of happiness together.”

Elaine was contacted regarding Etta’s announcement. Although Elaine outwardly expressed her acceptance of Etta’s sexual orientation, her words seem to drip with sarcasm. “There’s nothing to accept or not. You have to give everything a try! It doesn’t hurt! I’m happy my daughter has a friend like that. Every day for 24 hours, they sit in the living room and tell each other ‘I love you’. The Bible has a phrase about how being loved is happiness. If my daughter is able to take care of her friend, I would be very happy.”

Etta moved out of her mother’s house and is currently living in a 200-square feet subdivided unit with Andi. However, Elaine continues to pay for her 18-year-old daughter’s living expenses.

Elaine shared that she was in touch with Etta last week to discuss her weekly allowance of $900 HKD. “I just need to know that my daughter is safe!” When asked whether she is worried about Etta, Elaine said, “No, I’m not worried. If it were a boy, then I would be worrying about having grandchildren! I would have to support her whole family then? I don’t have that type of capability!”

Elaine said that her door is always open in welcoming Etta to go back home. Asked whether she felt that growing up in a single-parent household had impacted Etta’s sexual orientation, Elaine said that Etta had previously dated a boy. Elaine said, “I also grew up in a single-parent household. I was very independent as a child and knew how to take care of myself. But Etta needs a lot of love and someone to accompany her. A few years ago, I was filming a TVB drama and couldn’t come home until after midnight. Etta was even afraid to go to the bathroom by herself. Since [Andi’s] appearance and her constant ‘I love you’s’ every 24 hours, of course Etta would be willing to to accept.”

While promoting his new film The Foreigner, Jackie Chan (成龍) was asked about what he thought about his daughter Etta’s announcing her sexual orientation publicly. Always curt in his responses when commenting on Etta, Jackie said, “If she likes it, that’s fine.”

Although Jackie was never involved in raising Etta and they had a distant relationship, many netizens criticized Jackie for his indifferent response.