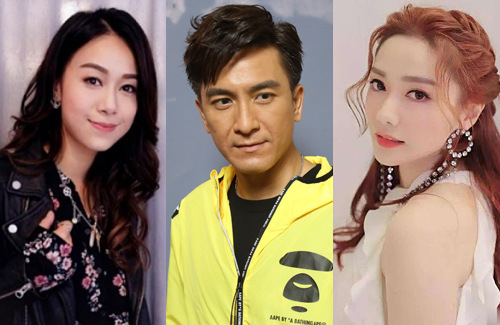 After ex-girlfriend Jacqueline Wong (黃心穎) had cheated on him last year, 46-year-old Kenneth Ma (馬國明) had expressed wariness about dating vain and superficial Hong Kong girls again. After a year of bachelorhood, Kenneth admitted to dating Jacqueline’s good friend, actress Roxanne Tong (湯洛雯), after they were spotted entering her home together. 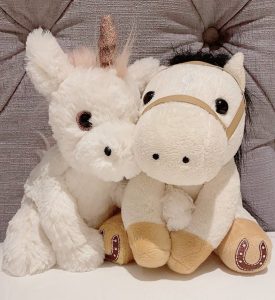 Yesterday, Kenneth and Roxanne updated their Instagram accounts with a photo of a hugging horse and unicorn plush animals. Tagging each other, they wrote, “Thanks everyone for your concern.” The gesture simply and effectively disclosed that they are a couple.

After her cheating scandal with Andy Hui (許志安) made headlines, Jacqueline escaped to the United States to hide from the hounding press for eight months. It was said that she attempted to salvage her relationship with Kenneth through numerous messages and video calls during this time. Despite wavering at one point, Kenneth was stopped by his mother who was strongly against the idea of a reconciliation. The filial actor finally decided to put a resolute end to the relationship, and only spoke of Jacqueline as being of a “friend” afterward.

Suffering a setback in both her romance and career, Jacqueline continued being frozen by TVB even after her return to Hong Kong. With no work opportunities, she tried to remain active on social media with regular updates of life with her niece, pets, or other positive content, in an attempt to rebuild her tarnished image while remaining on the radar.

Asked to comment on Kenneth’s new relationship, Jacqueline gave her blessings in her reply, “I wish him good health and safety. I’ll leave his personal matter to him.”

Replacing Jacqueline in both the drama Forensic Heroes 4 <法證先鋒IV > and in Kenneth’s heart, 33-year-old Roxanne’s latest development with the actor took everyone by surprise. The pair initially met in 2017’s drama Mind Hunter <心理追兇 Mind Hunter >, where they played onscreen lovers and even shared a kiss. A good friend of Jacqueline’s, Roxanne ran into Kenneth at social gatherings and stayed in touch, until their friendship morphed into a more intimate relationship.

Delighted that Kenneth and Roxanne have found love together, many artistes including Natalie Tong (唐詩詠), Tavia Yeung (楊怡) and Selena Lee (李施嬅) congratulated them. Roxanne’s ex-boyfriend Joey Law (羅天宇) said, “I’m happy for [her] and send them my blessings!”

Good friends with Kenneth, Edwin Siu (蕭正楠) and Hubert Wu (胡鴻鈞) claimed they did not know romance was brewing in the air. Edwin, who is currently filming a drama with Roxanne, spilled that Kenneth has visited the filming set many times. Edwin joked, “I was focused on my career and didn’t notice anything else! When the drama started filming, he visited me on set every day. It even made me think that he fell for me, but now everything is cleared up, so I don’t have to worry anymore!”

Many netizens left their blessings for the couple with messages such as, “Hope the two remain ever loving till the end!” Besides complimenting the two on their great compatibility, a few netizens revealed their unwillingness to forgive Jacqueline in their message, “Don’t be like that [woman] who appeared loving publicly but cheated with a married man in private.”