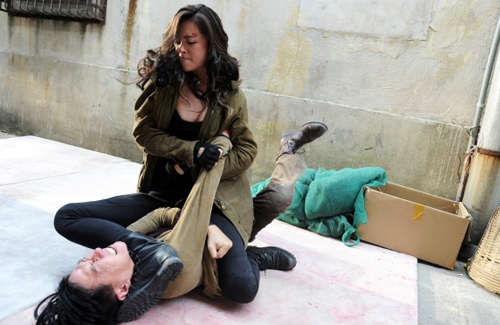 As one of the only females among a predominantly male cast, Janice’s role in Helios is strong and physical. Portraying Chang Chen’s assistant, many of Janice’s scenes are close-combat action sequences. Janice said she had to train six months before filming began, which included doing over one hundred push-ups per day.

In one scene, Janice fought off Nick Cheung, who chased her into an alleyway. With her agility and skill, she managed to escape from Nick’s grasp. During the shoot, Nick said he had a good fight with Janice, saying, “My eight-pack abs are now useless!” Janice also escaped from Ji Jin Hee and Choi Siwon in a gun fight.

Helios will open in Mainland China on April 30 and Hong Kong on May 1.

1 comment to Janice Man Beats Up Nick Cheung in “Helios”