Li Xiaolu’s (李小璐) affair with the rapper PG ONE has left lasting scars in her acting career and personal life. While she continues to battle against defamatory rumors and taking legal action against her slanderers, her husband Jia Nailiang (賈乃亮) has become a paparazzi phenomenon, and every move he makes would end up topping gossip columns and search engines.

Last night, a Chinese paparazzi team spotted Jia Nailiang making his way home after eating dinner with a few friends. Though Jia Nailiang did end up driving himself back home, two good-looking women who were eating with the actor earlier followed him to his apartment. The two women reportedly did not leave Jia Nailiang’s apartment until around 3 to 4 a.m. The women left separately, leading to speculations that Jia Nailiang may also be cheating on his wife. 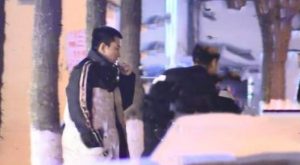 A video of the two women and Jia Nailiang walking together was published, but many fans doubted the cheating speculations. They reasoned that the actor and the two women did not act intimately with each other.

Jia Nailiang was quick to respond to the cheating claims. He wrote on Weibo, “I did not expect that a gathering with my college classmates would create so much attention from everyone. Thank you to the cameramen for your constant ‘concerns’ for me in this past year. When I’m out eating by myself, I am called lonely. When I invite my friends and college classmates to my home, that is called ‘late night intimate meeting with two women.’ But do you have to care about the time my friends come and leave? They left around 12, but it was written as 3 or 4. What are you trying to say?” 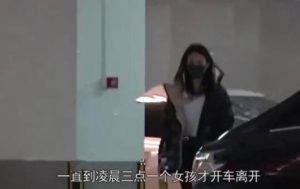 In another related post, Jia Nailiang told his fans that he, alone, has been doing well, leading to speculations that he and Li Xiaolu may have already divorced. The couple, married since 2012, have not been seen together for an entire year.

“I’m doing fine on my own,” wrote Jia Nailiang. “I don’t want to be embroiled in any more gossip. I’ve held it in for too long. Please don’t drag my name in for your convenience. There are still many beautiful things left for me to do. I will not let down others, let down life, and when I’m alone, I will not let down myself!”