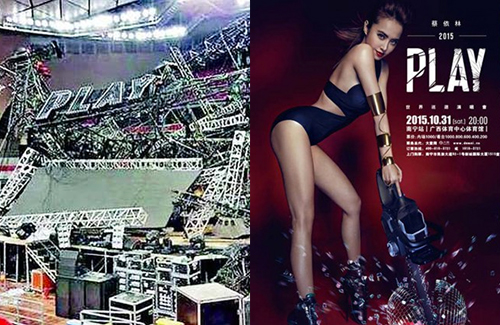 One person was killed while constructing the stage lights for Jolin Tsai’s (蔡依林) Nanning concert on October 29. Emergency services rescued thirteen other staff members who were trapped under the wreckage.

According to media reports, the concert, which was to take place on October 31 at the Guangxi Stadium in Nanning, was going through last-minute construction that Thursday. Around 5pm, the stage lights snapped and collapsed, trapping fourteen workers. Seven fire trucks and over thirty firefighters from the Nanning Fire Department were dispatched to the scene. Of the fourteen victims pulled out from the wreckage, twelve suffered minor injuries, one was in serious condition, and one was dead on arrival. Jolin was not at the scene when the lights fell.

A person involved in the concert’s management revealed that the organizers were trying to increase profits by using cheaper materials. “Luckily, the incident didn’t happen during the show.” The source then added, “The organizers really lack professionalism and are entirely responsible for this.”

The organizers released a statement on October 31, announcing that the concert has been canceled. Concertgoers can ask for a refund.

Jolin went to her Weibo and asked her fans to pray for the victims. She said, “After hearing about the incident, I feel absolutely awful. Let’s all pray for the injured workers.”