The 31 year-old actress/ singer said she is still hopeful about love.

Showing off their vocals at the Happy Galentine’s Day concert on February 14, Joyce Cheng (鄭欣宜), JW (王灝兒) and Stephanie Cheng (鄭融) generously shared their own and each other’s secrets with the audience.

When performing her own song “No Apparent Injuries” <無表面傷痕>, 31 year-old Joyce revealed that she was once close to tying the knot. “(Let me) tell you a secret, I almost got married once. Although (the relationship) failed, it shall not affect my life, as singles can also build a beautiful, fulfilling life for ourselves.”

The daughter of late Hong Kong comedian Lydia Shum (沈殿霞), Joyce had dated photographer Silas Lee for two years before they broke up in 2015.

The self-professed singleton said that she is still hopeful about love, and hopes there is someone waiting quietly for her to come home during major festivities or when she ends work.“I hope for someone to hug, to tell me ‘Welcome Home’.”

Stephanie also shared that Joyce uses the social networking app Tinder, to which the latter replied that she had wanted to find someone to watch a zombie movie with, and though she successfully located a foreigner, there was no follow-up after that.

Too Many Girls Named “Stephanie”

When JW and Stephanie were about to perform the song “Speechless” <講不出聲> together, JW shared that her ex-boyfriend had once kissed a girl named Stephanie Cheng when they were dating, causing her to wrongly identify the girl as Stephanie the singer as both had mutual friends.To this, Stephanie joked “No wonder you were so cold to me previously!” After the duet ended, Stephanie added ‘Why would I kiss your ex, he’s such a baddie!” to which JW played along, exclaiming “That’s true…!” 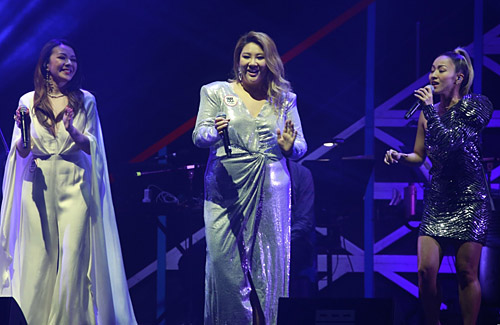