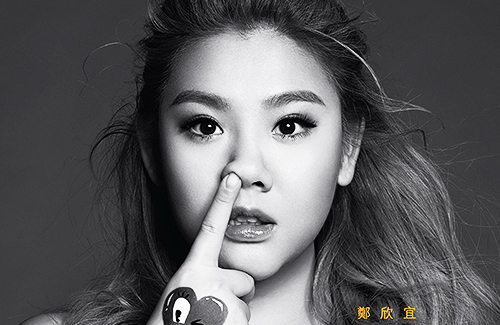 Joyce Cheng (鄭欣宜), who dropped her fourth album JOYCE on May 20, guested on a radio show to promote her latest studio effort. The 28-year-old songstress shared that she’s been quite jetlagged, as she had just returned to Hong Kong from Paris. She didn’t fall asleep until around six to seven in the morning, and also caught a cold.

Nonetheless, she said her Paris work trip was enjoyable. Though she was there to do a movie, she also managed to squeeze in some time to film an MV for her new album.

Joyce, who will be turning 29 on May 30, said she had requested a four-day leave from her agency so she can celebrate her birthday with close female friends. They plan to spend their vacation time at a sunny beach resort. “I’ll turn off my phone. I’ll enjoy the sun and read a book. It’s going to be great,” said Joyce.

Does she plan on wearing a bikini at the beach? “There’s no need to,” she said. (Plan to tan naked?) “Nope. That sounds pretty dangerous. I go to tanning salons instead.” Asking if it’s because Joyce feels insecure about her body, she said, “I feel great. Foreigners actually really like body types like mine, but that’s totally not the case in Hong Kong.”

Joyce also filmed a movie with sex symbol, Chrissie Chau (周秀娜), in Paris. Asking if her popularity exceeded Chrissie’s, Joyce laughed and said, “Yes. I am especially popular with black people. A taxi driver even said I looked spicy.”

A while back, Joyce was spotted chatting with a passerby in front of a bookstore. She explained, “He was a high school classmate whom I haven’t seen in 11 years. We lost contact after graduation. I was very happy to see him again.”