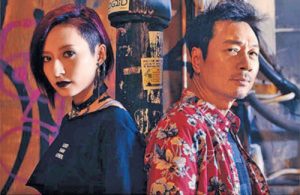 Luck has never been closer to Katy Kung (龔嘉欣) than this year. Not only did she star in four of the dramas released in 2020, but she also secured her first Best Actress nomination at the upcoming TVB Anniversary Awards for her performance in Death By Zero <殺手> after 13 years in the industry. The 31-year-old is also a contender for the Favorite Female Character award with her performance in the currently airing hit drama Hong Kong Love Stories <香港愛情故事>.

Being shortlisted for two major awards, she expressed, “I feel so lucky and happy. I definitely have confidence [to win]; this confidence comes from the affirmation of the audience.”

Indeed, she garnered positive feedback in her dramas this year, playing the villainous Yip Sai Mo in The Dripping Sauce <大醬園>, the crazy assassin Dark Angel in Death by Zero, and the down-to-earth Hong Konger Katy Yau in Hong Kong Love Stories. And at the end of the month, she will grace the small screen again with The Offliners <堅離地愛堅離地>.

Without a powerful individual backing her career, Katy said she poured her blood, sweat, and tears into each performance to gain the audience’s approval surely but slowly. “The three roles have shown the audience the different sides of me. It is really satisfying for me. If I had been nominated a few years ago, I was not mature enough then. The timing is just right for this year’s nomination, and it is definitely an affirmation.”

She added, “Death by Zero is a huge breakthrough for me. It was really not easy acting out the emotional scenes or martial arts scene, but I tried my best. I didn’t expect the audience to like this role, so I feel very satisfied and happy.” 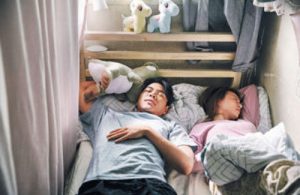 Continuing to challenge herself via different roles, Katy said she never contemplated whether or not to accept the job offer for Hong Kong Love Stories, in which she shares intense bed scenes with Joey Law (羅天宇). She shared, “I have worked with director Lincoln Lam (林肯) on several dramas. I didn’t hesitate [to accept the drama] because he was very convincing when he came to me with the role, and the story is fresh.”

The actress continued, “As for the sex scene, it was originally more daring. The director asked me to wear a bra with a front clasp for Joey to take off, but I immediately rejected the idea after listening to it. I really can’t accept it.”

In the drama, the two enjoy time alone as a couple in a love hotel. Smiling, Katy said it was her first time going to one, so it was an eye-opening experience. “If I wasn’t an entertainer and my significant other proposed to go to one, I would agree,” Katy said. “But there are many types of fun. Cooking together can be fun too; you don’t have to go to a love hotel.”

Willing to Live With In-Laws 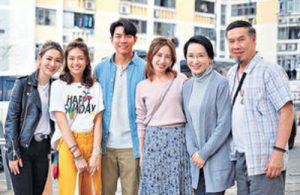 Unlike her character in the drama, Katy is not struggling to buy a property. At the beginning of the year, she spent nearly 10 million Hong Kong dollars to purchase a property, officially joining the homeowners club. “When I first started paying the mortgage, it seemed like it’ll take very long to pay off everything. I sometimes wondered whether I really needed to buy the property after I bought it. Now, I have to carry this unit for the rest of my life, and it’s pressuring being frugal in all aspects,” Katy frankly shared.

However, Katy doesn’t mind living with her husband’s family in the future. “I think it’s okay and fully understand it. When I was young, I insisted on living alone as a couple, but I don’t think it’s good if children are not around to take care of their aging parents. If we live together and everyone has space, I think it’s okay because I think it’s great if my other half is filial.”