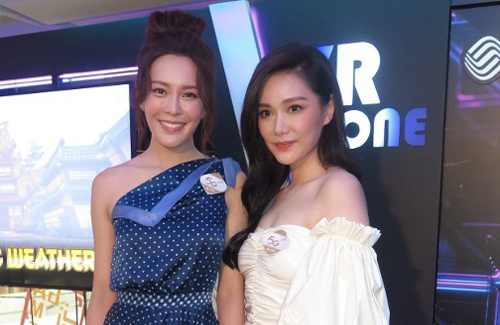 Due to the Hong Kong government restricting gatherings of more than four people in an effort to curb Covid-19 spread, the event had to undergo major adjustments before it could be held – including restricting the number of media reporters, taking temperatures, and filling out medical forms. Every reporter present was also required to wear N95 face masks. Although there were more than 30 people at this event, the organizers explained that this was an internal event and all shops in the area have been closed for three days for sanitizing and cleaning beforehand.

Choosing not to wear a mask during the event, Kelly is not too worried since the people around her are artistes and explained that there’s mutual trust between everyone. When asked if the event offered a very high compensation, Kelly said that she is already happy to be doing any event during these tough times.

Kelly also disclosed that her boyfriend, who previously visited a gym with a confirmed COVID-19 case, is currently in self-isolation for 14-days. Kelly said, “When we’re at home, we would FaceTime. There’s a bathroom in his own room, and his meals are placed outside his door. When he wants to talk, he opens his window and speaks so he could hear his own voice.”

Besides the conditions in Hong Kong, Kelly is also quite worried about her parents in the United States. Due to the increase in cases and the rise of racism in the US, Kelly said her parents have closed their shop for the time-being.

Roxanne and Family Use Separate Bathroom

Besides for work, Roxanne said she has been regularly wearing a face mask and using so much hand sanitizer that her hands are now extremely dry. Roxanne expressed, “My skin is coming off my hands because of all the sanitizing. I try my best to stay at home and for the most part, I would self-isolate in my own room and not talk to my family. I usually share a bathroom with my younger sister, but I told her we should stop sharing as a safety precaution.”