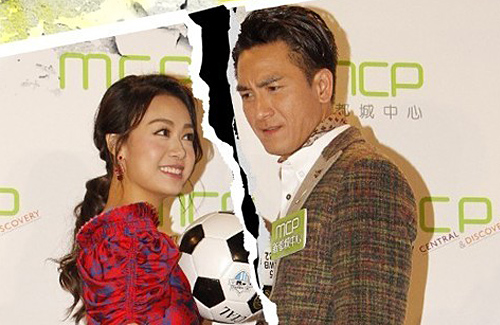 Since Jacqueline Wong‘s  (黃心穎) cheating scandal with Andy Hui (許志安) was exposed in April, Kenneth Ma (馬國明) has been ambiguous over the status of his relationship with her. Remaining protective over Jacqueline despite her betrayal, Kenneth was rumored to be willing to take her back after her pleas for forgiveness. Overwhelmed by the rumors, the 45-year-old actor finally confirmed that he has broken up with Jacqueline, “I can only say we’re friends now.”

Kenneth said emphatically, “We’re friends. I felt everyone’s reactions over this incident have been excessive. It’s hard to say who’s right or wrong in love. I was angry, but only for a short time. Afterward, I was more worried about her. I hope everyone’s reactions won’t be so excessive from now on, and can give her a chance.”

While ready to put behind their two-year relationship, Kenneth doesn’t mind collaborating with Jacqueline onscreen again. “I don’t mind. We’re still friends; she didn’t kill my father. There’s no need to magnify relationship problems.” Kenneth once again denied claims that he would fly to Los Angeles, where Jacqueline is currently studying. 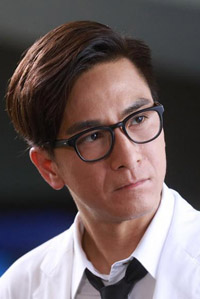 While his breakup with Jacqueline has obviously cast a pensive shadow on Kenneth’s face lately, his new drama Big White Duel <白色強人> is highly popular. He admitted that his character “Tong Ming” was one of his most difficult roles. “Since the character doesn’t have many emotional ups and downs, it’s difficult to make the onscreen performance stand out. It was a big challenge.”

During casting, Kenneth was more attracted to Roger Kwok‘s (郭晉安) “YT” character due to his grey boundaries and asked producer Marco Law (羅永賢) if he could have the role. Kenneth said, “YT is very well fleshed out. But in the end, the producer convinced me to portray Tong Ming.”

Starring in TVB dramas for 20 years, there are few roles that Kenneth hasn’t portrayed before. Perhaps that’s why he wants to portray a gay character. “I want to play a serious, and not comedic gay role. I don’t know if TVB is brave enough [to produce such a drama].”