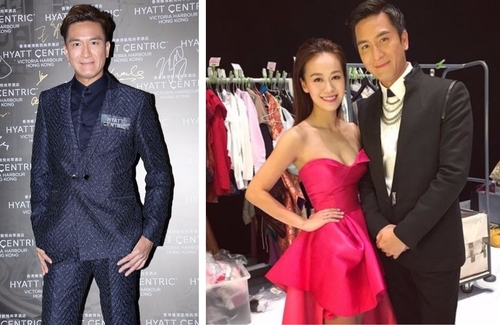 Reporters bombarded Kenneth Ma (馬國明) with questions regarding his ex-girlfriend Jacqueline Wong (黃心穎) when he appeared at a recent event. Since Jacqueline returned to Hong Kong this past Christmas, the media was curious to know if the former lovers met up. Kenneth frankly said, “I didn’t see her; we haven’t had the chance.”

He added that he doesn’t mind seeing her. “I send her messages like ‘Merry Christmas’ and such. We are friends after all. Don’t be mistaken and think that we hate each other!” Kenneth expressed.

On the topic of Jacqueline, the actor revealed he’s been watching her currently airing TVB drama The Maid Alliance <丫鬟大聯盟>. He praised, “I think it’s pretty good. It’s very simple and carefree. I’ve also been watching Of Greed and Ants <黃金有罪>. Both dramas are very different in styles, which is perfect.”

When reporters mentioned some netizens are refusing to watch The Maid Alliance because of Jacqueline’s cheating scandal, Kenneth said, “There’s no need. Each drama is not the work of just one person – it is the product of a group of people. By not watching a drama because of one person, you’ll be obliterating the efforts of others.”

Since TVB is airing Jacqueline’s dramas and she returned to Hong Kong, it is believed the actress is preparing for a comeback. Although Kenneth is not sure whether that’s true or not, he said, “You have to ask her. It’s her decision, but as her friend, I’ll support whatever she chooses.”

Reporters also asked Kenneth if he saw Jacqueline’s new hairstyle, which she debuted online. Kenneth shared he found out through the news, and he thinks her new look is ok.

Aside from talking about Jacqueline, Kenneth was also faced with the burning question of whether he is confident in winning the Best Actor award or not. Although a hot favorite this year, Kenneth said it’s best to stay neutral and treat the award show as a reunion among coworkers.

“I never vote for myself. That’s so embarrassing,” he said laughing. “I will vote for my Big White Duel <白色強人> costar Roger Kwok (郭晉安).”

Jacqueline Wong Wants to Move On from Cheating Scandal

13 comments to Kenneth Ma Is in Contact With Jacqueline Wong