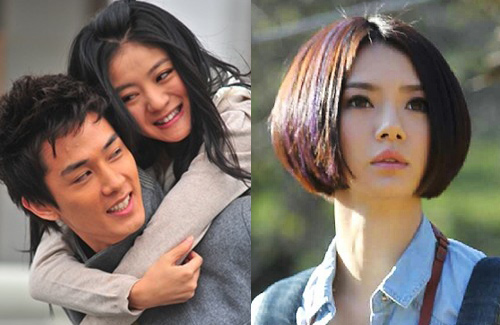 Above: Are Ady An and Stephy Chi love rivals?

According to Taiwanese news reports, Taiwanese actress Ady An (安以軒) was in a secret relationship with Korean-American singer/actor Nathan Lee (李承炫) for a little under two years. Almost half a year ago, however, the two split up, and Nathan began romancing mainland Chinese actress Stephy Qi (戚薇). An enraged insider took to the Internet to blast Nathan for cheating on Ady with Stephy, as well as criticize him for habitually exploiting his girlfriends’ connections to gain popularity.

Ady and Nathan met and fell in love when they worked together on the mainland Chinese movie Rhapsody of Marriage <結婚狂想曲>, which was released in 2012. To help further her boyfriend’s career, Ady introduced him to many industry insiders, including Wang Zhonglei (王中磊), the president of Huayi Brothers Media Group. Nathan eventually signed a contract with Huayi Brothers in the hopes of officially opening up his entertainment career in China.

Because Ady has always kept her love life a mystery, she and Nathan did not go public with their relationship. However, the news got around when the two were photographed on a secret date, during which Nathan was always at her side, carrying her bags and attending to her needs in every possible way. Ady’s close friends say that the one boyfriend whom Ady has acknowledged dating is Nathan.

According to an insider, however, Nathan proved himself unfaithful after meeting Stephy during the filming of Another Me on This World <世界上的另一個我>. At the time, Ady and Nathan were still in a relationship, although they were experiencing some minor conflicts. Nevertheless, Nathan told the cast and crew that he was single and seemed intent on pursuing Stephy, the drama’s female lead. He and Stephy later started going out and even filmed a very intimate music video for her new single, “Us, Us” <我們我們>.

After Nathan’s unceremonious rejection of Ady, sharp-eyed netizens have spotted evidence pointing toward his new relationship with Stephy. For example, when Nathan participated in Jiangsu TV’s reality show Stars in Danger: The High Dive <星跳水立方>, he wore a couples ring like the one Stephy has. Moreover, he made a “7V” gesture before his dive, indicating his girlfriend’s nickname.

However, some netizens are skeptical of their relationship, pointing out that Nathan most likely used Stephy’s connections to meet director Jeffrey Chiang (蔣家駿) and land a role in the TV drama The Lady in the Cubicle <格子間女人>, which stars Stephy’s good friend Tiffany Tang (唐嫣). A few netizens even expressed their disgust for Nathan’s over-reliance on his girlfriends, saying that they feared Stephy would meet with the same disastrous end as Ady had.

TAGS: Ady An, Nathan Lee, Stephy Chi, The Lady in the Cubicle